I recently have been spending my time in Zanesville, Ohio thanks to the police officers here who like to cage people for filming them and a judge who caged me for saying “mother fucker.” Since the CopBlocking Zanesville and Meet Herb videos have come out the Zanesville CopBlock Facebook page has been blowing up. Most of the attention is good but some is not and several Zanesville CopBlockers have reported to me that they have been facing harassment by ZPD. The Zanesville CopBlock founder, Darcie, had one ZPD supporter give her a shoulder check when she was picking up her child from school. Meanwhile, Herb is fielding phone calls from people saying, “They’re going to get him” and more to his home phone. One of those calls may have came from of a local judge and I was even present during another one of these harassing phone calls.

I’m not surprised by this at all, this is how the police (and most government agents in fact) react to those who question their actions. Since they are highly trained in the use of force, and not social communication, or problem solving tactics, this type of reaction is what I expected. What I didn’t expect was to be given a glance into one of Zanesville’s Finest via Facebook, which is what happened when I woke up this morning to an anonymous submission with the following picture: 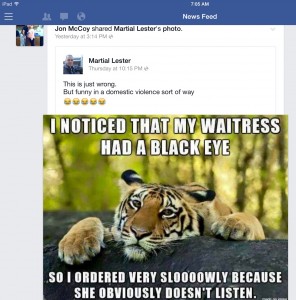 There was also a short message that stated, “This is Jon McCoy’s Facebook page and he’s openly supporting domestic violence. If you don’t know Jon, he’s the officer recently featured in some of your recent videos from Zanesville.” Upon receiving this message I thought it would be worth taking a peek at Jon’s Facebook page. What I found was pretty telling of the mindset this officer has.

From Jon’s public – as I didn’t have to friend request him to see his timeline – Facebook page I took the following screenshots. Check them out and ask yourself, is this the type of guy you want protecting you? Now I’m all for freedom of speech and standing for what you believe in, obviously. Yet, some serious consideration has to be given to the root cause of these posts. Was McCoy merely giving me lip service when I ran into him the night I went out CopBlocking in Zanesville (see here)? He claimed to be in support of people’s rights, he attempted to portray himself as a tolerable, reasonable cop who’s spent most his life in a uniform fighting for ‘our rights.’ He gave stories and examples to counter the claims of locals, particularly Herb, who claim he’s ‘put his hands on them’ in the past.

Maybe those making such accusations were right because according to Jon’s Facebook post, he seems to be an angry person with violent tendencies. Sharing content that states, “Make a difference in the world, double tap a terrorist” or “Some people remind me of old TV sets. You have to hit them a few times until they get the picture.” Is this really how McCoy feels problems should be addressed? By shooting people in the head – twice, or smacking them until they get the picture? Is this the mentality the city of Zanesville seeks in their police employees? Does Jon have anger issues? How many complaints have been filed against him since he’s been a cop? Maybe this is why his children live in Newark, OH (presumably with their – less aggressive – mother) and not with him? I don’t know, but I do know that the next time I see Jon McCoy out on patrol in Zanesville, I’ll have my camera and start filming immediately. He might treat me like an old TV and give me a few smacks until I get ‘his’ picture. Or he could go as far as to ‘double tap’ two bullets into my head thinking I’m his idea of terrorist. I hpoe none of that happens but I’m going to be prepared, as the information is right here at our finger tips, this cop has some issues. You’ve been warned.