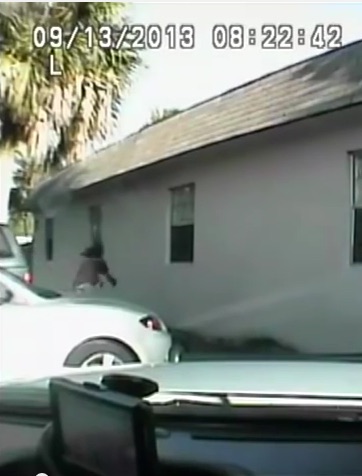 In the wake of the Scott Walker murder by Michael Slager many CopSuckers (police apologetics) have claimed that such incident was an isolated one. Well, that should make this story from September 2013 hard to explain. According to the original story posted by Arizona’s ABC 15:

Exclusively-obtained dash-cam video shows Dontrell Stephens, 20, talking on a cell phone while riding his bike on a Friday morning in September 2013.

He can be seen turning onto Norma Elaine Road near Haverhill Road and Okeechobee Boulevard as Palm Beach Sheriff’s Office deputy Adams Lin trails him.

Moments later, Stephens realizes he’s being followed.  He pulls over, gets off his bike with a cell phone in his right hand and walks toward the deputy.  For approximately four seconds Stephens is out of frame only to be seen again when being shot four times.

Stephens, who is black and has a criminal record for possessing cocaine, is seen running from the bullets then dropping to the ground.

Stephens was armed with nothing but a cell phone.

The video, exclusively obtained by ABC15 sister station WPTV News Channel 5 and The Palm Beach Post as part of a joint investigation into police shootings, was released as part of a federal wrongful death lawsuit filed against PBSO.

A short time later, an admittedly shaken Deputy Lin is heard talking to another deputy.

That day, Sheriff Ric Bradshaw went on TV to defend the shooting.

“Stop what you’re doing and comply with us,” he told reporters.  “There’s nothing in the rules of engagement that says we have to put our lives in jeopardy to wait to find out what this is to get killed.”

This incident took place in September of 2013 and we’re just now seeing this footage. Once again making the case for filming the police at all times because obtaining their footage is extremely difficult, especially when officers have done wrong. Had Dontrell Stevens had someone filming this incident maybe this officer would be facing murder charges too. Instead, you get to see how the police apparatus helps to protect their own. Not only do court records and media reports quote additional officers on scene as stating, “I’ve got your back” but the Sheriff himself backed the actions of his officer saying, “There’s nothing in the rules of engagement that says we have to put our lives in jeopardy to wait to find out what this is to get killed.”

Now Dontrell is paralyzed from the waist down simply because he’s a victim of the war on drugs, past cocain possessions were the cause of the officer’s attention though no drugs or weapons were found on his possession this day, and officers today have a shoot first and ask questions later mentally. Which is easy to have when an entire police force and justice system is at your back to help clear you from the charges.