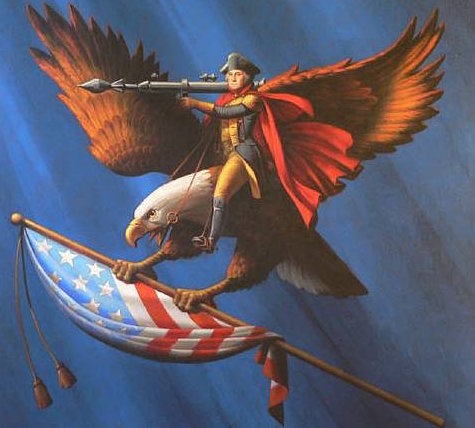 Anita Najiy was recently promoted to assistant chief of the Miami Police Department, but her refusal to recite 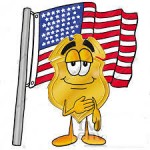 the pledge of allegiance has angered the president of the local police union. Sgt. Javier Ortiz has his panties in a near-critical, level eleven wad over the incident.

“By not publicly showing her allegiance to our nation with the rest of the Miami Police Department, she is violating our oath. If she isn’t loyal to the United States of America, what country is she loyal and allegiant to?”

Ortiz gave the previous statement to local media following the ceremony, just before climbing into a palm tree and tossing his excrement at those passing by. After being ignored by strangers, who thought the police union chief had escaped from a home or something, the angry troglodyte ran home on all fours and fell asleep in a pile of patriotic stuffed animals while crying and singing Madonna’s dance remix of the Battle Hymn of the Republic.

Nobody but Ortiz seems to think it is a big deal. Asst. Chief Najiy has not responded to his misguided and totally fucking stupid outrage. Her actions were consistent with both military protocol and the departments guidelines and expectations. Meanwhile, Ortiz himself has come under fire for from the Miami Police Benevolent Association.

“Racism cloaked in patriotism is a huge insult to the American flag, the city of Miami Police Department, and the countless hate and anti-Muslim filled rants generated by the recent antics of the FOP president; those two things seem to be the genesis of the current false controversy. A person who calls attention to Assistant Chief Najiy’s decision to stand respectfully at attention during the Pledge of Allegiance, while he himself video taped the proceedings rather than pay the proper respect to the flag, is acting like a hypocrite.” 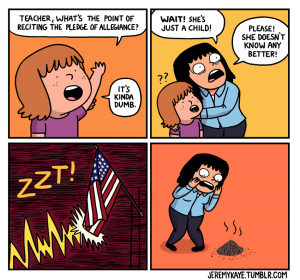 Miami residents and the American public were busy not giving a fuck about one ignoramus’ outrage over meaningless drama, instead choosing to focus on more pressing issues like widespread corruption, misconduct and abuses by police in Miami and across the country. A flag is just a piece of clothe that represents an idea. The American flag was intended to represent ideas about justice, freedom and liberty. By my calculations, police are increasingly becoming the enemies of those ideas. Pledging allegiance to a flag that represents them is an act of hypocrisy when you are part of a system that denies human beings justice, freedom and liberty.

Those who cannot distinguish between a symbol and the objects or ideas being symbolized are hopeless buffoons. Yet these idiots have gained power and have managed to entrance a following of kindred intellectual mongoloids. The central theme of the police or any of the other myriad problems we face boils down to one single issue- stupidity. The presence and attachment to irrational ideologies and unquestioning obedience to them is the single greatest crisis we face. Monolithic moronity is the central tenet of authoritarianism and those grossly unintellectual galoots who cheer it on. Yet stupidity is not the natural state of the human species. It is a state that arises out of lifelong persistent conditioning via public education, the mainstream media and brainwashing rituals like the pledge of allegiance; which itself helps to erode our critical thinking capacities by distracting us with empty symbols in place of our rationality and humanity.