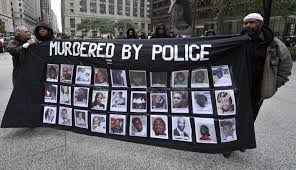 THE FIVE DEADLIEST POLICE STATES OF 2014

In 2014, 28 people were killed by police officers in the state. Exactly half of those were killed by officers in Maricopa county. Nine of the victims were completely unarmed, three had a knife, and twelve had a gun. One victim was a female and the rest were men. The youngest victim was William Osterlind, who was 18 years old. The oldest victim was 58 year old Ronald Henry Jr. Half of the incidents occurred in the morning, with the other half in the afternoon and evening. Twelve of the victims were white, eleven were hispanic/latino, two were black, one was American Indian and the others unknown. The craziest incident was a former Army veteran that was outside at midnight, walking around naked. When a Maricopa County deputy pulled up to him, he opened the deputy’s door, attacked the deputy and tried to take his gun. The deputy responded by shooting the man dead. For more information, go to: http://victimsofpolice.com/2014/victim.pl?=David-Brandstetter

In 2014, Oklahoma police took the lives of 17 people. In two incidents, automobiles were used as weapons, nine of the victims had guns, three had knives, and three were unarmed. Two of the victims were female and fifteen were male. The youngest victims were 19 year old Henry Jackson and Jeremy Lake and the old were 45 year old Mark Kelley and Jesse Castillo Jr. Six of the incidents happened in the morning while eleven happened in the afternoon and evening. Six victims were white, three unknown, three hispanic/latinos, one Native American, and four blacks. The saddest and most reprehensible of these killings was that of Luis Rodriguez, in front of his wife and daughter. Someone had called the police because the mom had slapped her adult daughter. When the police arrived, they asked Luis for his identification. He refused and stated that what was going on was a family issue and they did not need to get involved. The officers then proceeded to beat the life out of the 44 year old man, some of which was caught of video. Unfortunately, none of the officers will pay for their crime. More information along with the video can be found here:

In 2014, Utah police officers killed 14 people. Five of the victims were unarmed, six had guns, and one had a sword. Three victims were female, the rest were men. The youngest victim was a five year old little girl Haley Boren and the oldest was her 55 year old grandmother Marie King. Three of the incidents happened in the morning and the rest were in the afternoon and evening. Ten of the victims where white, two were hispanic/latino, and one was black. The most tragic of these incidents was the murder of two children, their mother and grandmother by their father/husband/son-in-law who was a Lindon police officer. The mother told the officer that she was going to leave him, so he came home and killed everyone and then committed suicide. For more information, go to:

Last year law enforcement officers in the state killed 15 people. Eleven of the victims had a gun, one used a car as a weapon, one was unarmed, one used a knife and one had a fake gun. Only one of the victims was female. The youngest victim was D’Andre Berghardt Jr., a black man, and the oldest was a 49  year old white woman Mimi Goldberg. Nine of the victims were white, three are unknown, and three were black. Eight of the incidents happened in the morning, while seven happened in the afternoon and evening. The most notable incident was the killing of Jerad Miller, after he killed two cops while they were having lunch in a pizza place. After he killed the two cops, he went to Walmart where his wife killed a man, and then the two got into a fire fight with police. In the end, after Jerad and his wife got shot up, she tried to kill Jerad, before ending her own life. As it turns out, the bullet that killed Jerad was not from his wife, but from a police officer. More information, including video can be seen here: http://victimsofpolice.com/2014/victim.pl?=Jerad-Miller

With the fewest residents of the top five, New Mexico has the highest per-capita police involved death rate of 2014. Last year New Mexico police killed 13 individuals. Seven of the victims had guns, two were unarmed, one had a knife, one had a fake gun, and one used a car as a weapon. The youngest was 16 year old hispanic/latino Victor Villalpando who used a fake gun to trick police into killing him. The oldest was 61 year old Native American John Rogers. Arguably one of the most explosive police involved deaths of 2014 was the murder of the white, paranoid schizophrenic homeless man James Boyd on March 16. James was gathering his things in order to comply with the officers’ orders when 38 year old Officer Sandy P. Keith and 33 year old Officer Dominique W. Perez shot him in the back. Not only was the shooting caught on video, there is audio of Keith bragging that he planned to shoot Boyd in the penis with a shotgun. Fortunately, both officers are being charged with murder.  More information including video can be found here.

2014 was a deadly year for Americans. Lets hope that we can put an end to this madness by taking action.

Six things you can do to reduce the slaughter: