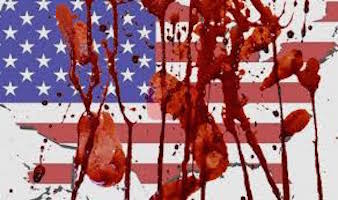 The brutal murder by police of Freddie Gray in Baltimore, Maryland has led to a cornucopia of craziness. As Baltimore burns in the throes of revolution, the hypocrisy of many Americans begins to show itself in a media blitz of stock responses that echo the canonized sound bites of media pundits. The 3×5 notecards of acceptable opinion replicate themselves like intellectually impoverished memes in social media and other public venues of discussion.

The insipid sloganeering of both the politically right and the left acts as a deterrent to critical thinking and logical analysis; while at the same time ignoring basic knowledge of history, psychology and human behavior. It has gotten so bad that even many who pay lip service to the liberty movement have lost sight of the larger truth and are instead parroting some Ayn Rand level newspeak about property, peace and commerce. 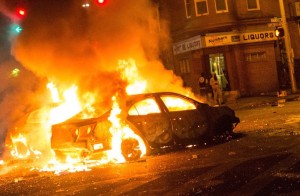 Revolution is a Messy Business.

The people in Baltimore are revolting. They are revolting against a system of institutionalized brutality that statistically targets people by race and class. They are revolting against criminals who murder their brothers and sisters in the streets and against the larger economic, political and social paradigms that make it possible. Whether or not their revolution leads to a permanent change remains to be seen, but a revolution is an action, not a measurement of success.

All revolutions are marked by violence and destruction. The American Revolution that patriots of all political persuasions and those who speak of liberty often refer to was marked by an excess of brutality, disruption and damage. The Sons of Liberty, darlings of revolutionary discussions, often employed all of these methods. Violence and destruction became tools of revolt during the Boston Massacre, the Gaspee Affair and the Boston Tea Party; all seminal events in the path to American liberty. The foundation of our way of life was built upon the very same tactics we criticize those revolting in Baltimore for using. (“So, what did you think of the Boston Tea Party?”)

Further to the political left we hear criticisms about the violence and destruction as talking heads and their followers speak about ‘peaceful demonstrations’. This is always laced with the irrational assumption that peaceful demonstrations are an effective method of widespread change. Martin Luther King Jr. helped to organize peaceful demonstrations against racism that millions of people participated in. And after that there was no more racism ever, right? Peaceful demonstrations, in many cases, are symbolic distractions which allow people to feel good about participating in activities that have very little real effect. At the same time they are a luxury that cannot be afforded by people who are dealing with immediate problems that require a fast, local response. People with few resources who have been marginalized by the systems they revolt against.

“A riot is the language of the unheard.” -Martin Luther King Jr. 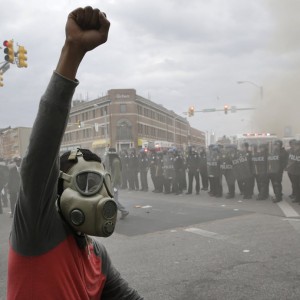 Many others decry the disruption that such activities cause their daily lives. They have concocted some worldview which allows them to believe that the continuation of labor and commerce are more important than a response against brutality, tyranny and bigotry. Those who think that they can just ignore these problems are some of the same people whose property is being destroyed. While they may not side with authority or against the protestors, their own silence, apathy and dedication to the status quo has made the police state possible. When you ignore police violence just because you think it does not apply to you, the conditions are created by which your property becomes endangered by the flames of revolution. As the tired old adage goes, “If you are not part of solution, you are part of the problem.”

Sentiments in the vein of, ‘They are not even targeting those who are the problem. It is just random violence, destruction and theft,’ are also common. Revolution is not rational. It is human. It is flamed by the passions of the powerless. It is not logical or strategic. It is not a direct response to a single force, but an acting out against all of the forces that collude to create the paradigm that has aroused the revolutionary ire. While looting, vandalism and violence may be undirected acts, they are direct responses to oppression. When the shackles of restraint are eroded by the abuse of the institutions who enforce that restraint, all acts deemed inappropriate by those institutions become acts of revolution. All is fair in love and war and a revolution is both. A revolution is a war against oppression fought for the love of one’s self and fellow humans beings. 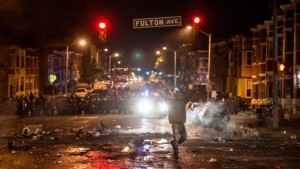 The moralizing and criticizing of the specific acts of revolt are a luxury of the comfortable. They are a reaction inspired by the delusion that tyranny cannot happen to them. Yet, as the police state grows its violence and depravity extend outside the lines of race and class and threaten us all. Comfort has become a luxury that can be afforded by none. By shaking them out of their comfort, the unaffected are forced to confront the reality of the situation, even if they fail to interpret or understand it. Even the random disorder in Baltimore is a blessing. The flames of revolution, even when they become contained, clear out a swath of civilizations diseased forest. The violence and destruction become plows by which the soil of society is torn up and tilled so that the seeds of the future can be planted.

A journey of a thousand miles begins with a single step. And sometimes that step is taken in stolen shoes while fleeing from the states thuggish jackboots in a wild goose chase through the turmoil and disorder created by the collision of apathy and tyranny.