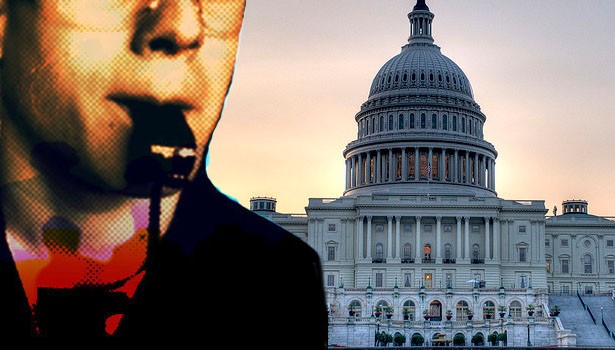 The bill would repeal the Patriot Act entirely and repeal the FISA Amendments Act, as well as a landmark 2008 expansion of the Foreign Intelligence Surveillance Act.

There is no sign of an end to the erosion of Constitutional liberties that began under George W. Bush after the 9/11 attacks and continues under Barack Obama, the group said Monday.

“The government chose in great secrecy to unchain itself,” said Thomas Drake, who worked at the National Security Agency in 2001. Drake says he saw lawlessness spread under the name of “exigent conditions” during the Bush presidency, and then, as part of Obama’s war on whistleblowers.

Drake himself was prosecuted by the Obama administration under the Espionage Act – a law intended to brutally punish spies for talking to reporters. After a four-year long ordeal that a federal judge called “unconscionable,” all 10 felony charges against him were dropped in return for his guilty plea to a single misdemeanor.

At the event, Pentagon Papers discloser Daniel Ellsberg called for an end to the NSA’s “unconstitutional” domestic surveillance program and referred to Edward Snowden and Chelsea Manning  as “heroes.”

“We need more Snowdens, we need more Chelsea Mannings,” Ellsberg said. “Had there been some earlier, there would not have been an Iraq war. That would have been a very great service to the United States and the world.”

“We all owe one debt of gratitude to [former CIA Director] Petraeus for showing what a legal farce” the government’s policy has become, said former Justice Department trial attorney Jesselyn Radack, who now serves as director of national security and human rights at the Government Accountability Project.

The 1917 Espionage Act has become “the Obama administration’s weapon of choice except for with Petraeus,” Radack said. “Whistleblowers and journalists who recently exposed illegal domestic surveillance were jailed, bankrupted and prosecuted. Prosecutions under the Espionage Act are done in secret, with no opportunity for those charged to discuss their motive.”

Its use under Obama to “silence journalists and activists has been disaster for all my clients,” Radack continued, adding that though the 2012 Whistleblower Protection Enhancement Act was a step forward, what’s needed are “real whistleblower protection reforms, such as those once called for by candidate Barack Obama.”

Touted by the attendees, the Surveillance State Repeal Act would not only eliminate post-911 surveillance expansions, but it also contains protections for national-security whistleblowers against retaliation by government and makes probable cause the basis for foreign-intelligence surveillance of an American or someone on US soil.

The bill faces an uphill battle, with only ten current co-sponsors.

“The U.S. is violating the rights of everyone in the country, and it’s still going,” said former 30 year NSA intelligence official William Binney, who, after retiring in 2001, exposed NSA access to telecom companies’ billing records.

The domestic surveillance program was a “covert project that was kept from [most of] Congress and the judiciary using fear mongering, manipulation, and co-optation to keep all three branches of government in agreement,” Binney said, adding that beginning under President George W. Bush, the program was called “legal” but never “constitutional” in order to avoid a challenge on Fourth Amendment grounds in the Supreme Court.

“The entire electorate was uninformed, and we would never know about it without whistleblowers,” Binny said.