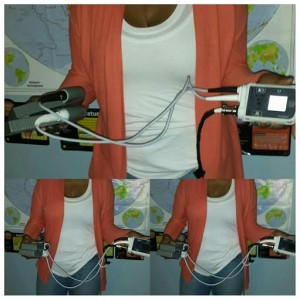 Indianapolis Metropolitan Police Department Officers have profiled individuals based on their INVISIBLE DISABILITY, and refused those individuals the use of Handicap Parking accommodations under ADA, even while the citizen is in possession of a valid Disability Placard.

On March 21, 2015, I parked in a handicap parking space in the parking lot of a local sports bar n’ grill. After exiting my vehicle, I was approached by a Sergeant of the Indianapolis Metropolitan Police Department. I had a valid and visible Disability Placard which belonged to me. However, the Sergeant stated I was required to show paperwork proving that I was the rightful owner of the disability placard. THIS IS NOT AN INDIANA LAW. The proper or legal procedure would have been for the Officer to request the driver’s license or identification card, identification numbers imprinted on the placard, or to run the license plate of the vehicle. Per the Indiana Bureau of Motor Vehicles, the state agency who approves and issues the Disability Placard, there is no state law or requirement stating individuals must provide paperwork as ownership to an officer of law upon request, and that the disability placard application appears on your driving record.

Even after attempting to show my VISIBLE disability as an LVAD recipient (Left Ventricular Assist Device, which is a pump attached to my heart with an external driveline, batteries, and controller that are attached to me 24/7), this Sergeant informed me that I would be required to move if I did not provide paperwork!

With all of the tragedy taking place across this nation at the hands of law enforcement and citizens alike, I found it hard to follow through with those same words I have uttered to my children, “Obey the Law.” It’s easier said than done. Until you are placed in that position, no one will truly know how hard it is to “Obey the Law” when you know you are in the right! Obeying the Law, I moved, parked in handicap parking in a parking garage a few blocks away only to walk back and witness no one park in either of the two available handicapped spaces for the next two hours.

Though I don’t agree with the current situation in Baltimore, I can understand it. What most don’t realize is my appearance in no way accounts for the sensitivity and severity of my medical condition. Even though I was breaking no laws, Sergeant Rennaker of IMPD willfully and deliberately violated my civil rights in a biased discriminatory manner. As my friends in law enforcement have stated, my first mistake was that I exited my vehicle as an attractive African-American woman, dressed nicely, and with no visible disability; it presented an opportunity for me to be harassed, discriminated against, and to have my civil rights violated.

It really hit me this past Thursday evening. My nurses explained that had I refused to move (which I had every right to do so), and had he attempted to apprehend me, if my driveline/tubing had been dislodged, he would have KILLED me. Not only me, but my friend and cousin, who were present also, would have been in jeopardy. Considering he had no interest in my disability, device, tube, or equipment when I displayed it to him, this very well could have been the case. I don’t even want to think about the outrage, chaos, riots, protests, and racial tension this community would have faced as a result of such a tragedy. Indianapolis and the Broad Ripple Community could be a Ferguson or Baltimore right now! More importantly is the trauma it would have caused my children.

Had I exited my vehicle requiring the use of a wheelchair, would I have been approached? If I needed oxygen to assist me in breathing, would the Sergeant have requested paperwork to show ownership of my disability placard? Had I been an elderly white woman would I have been profiled as “BEING DISABLED?” Heart Disease, known as the “silent killer,” is the number one cause of death in the United States of America. However, in most cases it does not present itself as a visible disability. PVD (peripheral vascular disease) affects 8 to 12 million people in the United States with symptoms that aren’t present to the naked eye; and Sarcoidosis affects thousands of people in the United States, which can result in joint pain and stiffness. Hyperthyroidism disease symptoms can present themselves as weight gain, which can lead to obesity in some cases, weakness, fatigue, muscle cramps, and frequent muscle aches. Varying estimates place the number of individuals affected by Hyperthyroidism at 10 million.

Sickle cell anemia affects 70,000-100,000 individuals in our nation, and it is estimated that Lupus affects 1.5 million people in the United States alone, both mainly affecting African-Americans. I could continue to name conditions that affect millions of Americans, which limits the distance an individual may be able to walk due to pain, shortness of breath, or fatigue, but do not present themselves as an outward disability. My question is, does it have an age, condition, ethnicity, or color:

(Please sign Marie’s MoveOn.org Petition to bring attention to and help prevent this unnecessary and uncalled for abuse of disabled people by the Indianapolis Metropolitan Police Department.)