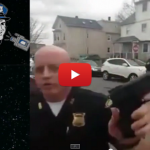 The video above was sent to CopBlock.org’s email and shows an alleged Boston Police officer, who might be a sargent, approaching a man who was filming a group of cops on a street corner. It seems like a heavy police presence was certainly going on as there are nearly a dozen police officers in the background of this video.

At one time an unknown Boston police officer walks up to the man filming and asks, “Do you want to go for a ride with me in my cruiser?” The man asks why and the officer states he (man recording) could get some ‘real’ action then. Then the officer decides to walk away and you think the interaction is over but all of the sudden you hear, “don’t put the camera down, point it here.” As the man raises the camera you notice the officer coming back with a gun in his hand. He gets very close to the camera while saying, “this is why we’re here.”

Was the gun a weapon in a crime? If so, should the officer be carrying it around? Isn’t it evidence? Or was this weapon found during a search? Regardless, I still don’t know what point the officer was trying to make. So you have a gun? Great, why don’t you focus on the crime committed with that gun and not on the person merely filming the police.

I’ve reached out to the person I believe recorded this video, if I get a response I’ll update this post. Or I’m sure it won’t take long for the readers to identify this gun waving officer. If you have any information about this story contact me here.