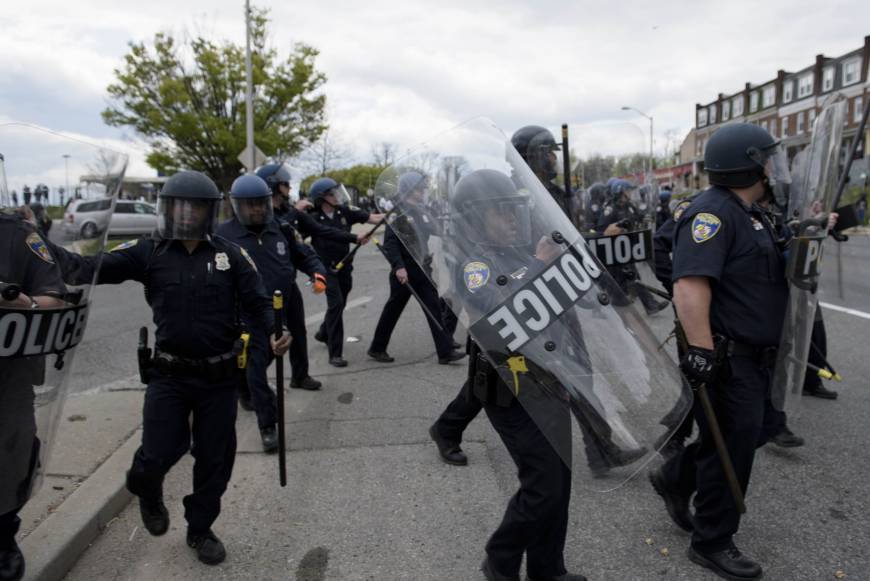 *Originally posted at The American Prospect by NATHALIE BAPTISTE.* 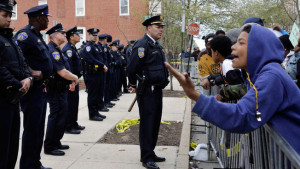 An unarmed black person is six times more likely to be killed by police than is a white person who carries a weapon.

As cities erupt after decades and centuries of oppression and violence at the hands of police, calls for nonviolence can be deafening. “Violence isn’t the answer,” the moralists scream. They are right. But they are telling the wrong people.

On April 12, Baltimore resident Freddie Gray made eye contact with a police officer and ran. When he was detained, he was found in possession of a switchblade. Gray was taken into police custody where his spine was severed. One week later he was dead; by the time of his funeral on April 27, neither his family nor the community still know what led to the fatal injury.

After Gray’s family laid the 25-year-old to rest, and after days of peaceful protests, Baltimore erupted into what has become an all too familiar sight. Police donned riot gear as buildings and cars burned.

Gray joins the infuriatingly long—and ever-growing—list of black people killed by police. Their names echo on the streets of American cities where the frustration of those targeted is reaching a boiling point. Mike Brown. Rekia Boyd. Aiyana Stanley-Jones. Walter Scott. Akai Gurley. Each death leaves the black community and its allies a little bit sadder, but united nonetheless. Marches, rallies, and, protests have reverberated in every major city—a lot of them peaceful, but some that resulted in the destruction of property and violence.

As officials call for peace and nonviolence, perhaps the police could heed some of that same advice.

In Baltimore, police killed six people in 2014. Five were black and one was Hispanic.

An unarmed black person is almost six times more likely than an armed white person to be killed by police.

Seven-year-old Aiyana Stanley-Jones was sleeping when Detroit police entered her house and shot her in the head. Akai Gurley was taking the stairs in his apartment building when Officer Peter Liang of the New York City Police Department shot him. Why are the killers of a sleeping seven-year-old not condemned as murderers when rock-throwing teenagers are considered violent thugs? Why is the death of a man whose only crime was being in a stairwell not decried as violence?

Eric Garner’s gruesome choking death, which was caught on video, does not illicit calls of nonviolence, but the burning of an inanimate object spurs a landslide of Martin Luther King Jr.’s quotes, sanitized for white consumption. If burning buildings is an act of violence, police murdering civilians with impunity must be called violence too.

NBA player Carmelo Anthony, a Baltimore native, urged protesters to stop destroying the city. David Simon, creator of The Wire, came out to tell protesters to go home. Baltimore. Their celebrity could be put to better use in urging police officers to stop killing black people.

Baltimore Mayor Stephanie Rawlings-Blake denounced the protesters as “thugs.” President Barack Obama said in a speech on Tuesday afternoon that rioters should be treated as criminals. We should treat killer-cops as thugs and criminals too.

To be clear, destruction of property isn’t a good thing. Vital institutions like churches and even corporate chains serve a purpose. Baltimore residents who were employed at the CVS that was burned on Monday are likely now out of a job. People who relied on that store to get their life-saving prescriptions are now pressed to find a new pharmacy in a heartbeat.

But Baltimoreans have taken to the streets because of the violence that consumes their city at the hands of the state. They are throwing rocks and burning cars because the unbelievable anguish one feels when his brothers, his sisters, and his neighbors are slain and even murdered, because of his melanin, by those who are supposed to serve and protect.

Yes, violence isn’t the answer. Maybe somebody should tell the police that.