The video above is a snippet of the new hit single, “the Anthem”, which was just released today by Bulletproof & the Fool – available exclusively at the CopBlock store. Below are details on how to get the song on your computer, smartphone or other device(s).

Bulletproof (aka Chris) and the Fool (aka Keith) are hip hop artists from Indianapolis. On any given weekend they can be found tearing up the hip hop scene anywhere in the midwest. They were put on my radar when their manager, Pete Sandage, contacted me when a Cop came on stage and took the duo’s microphones from them – see here – in the middle of performing another one of their poplar songs, “Call the Cops” (see video below). Luckily they had some back up mics ready and the show went on. 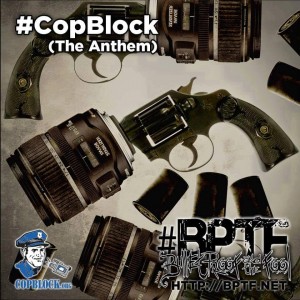 A few weeks later I headed to Indianapolis for a weekend of CopBlock events and, let me tell you, these guys go all day long. In basically a 36 hour time frame, we held a CopBlock Photoshoot, CopBlocked downtown Indianapolis and even had time for Taco Night. That’s when the guys told me that they were working on this track called the “Anthem.” I was interested and willing to help spread the message, at this time they knew it was going to be about filming police, so when I left them that weekend, we decided to stay in touch..

It wasn’t long after that trip that I was sent the mastered version of “the Anthem.” When I first heard it I was hooked, the way it flowed, the sounds of the camera in the background it just made me bob my head up and down. Especially when the hook hits, “you have the right to remain silent. Anything you say, can or will be used against you. You have a right to an attorney. Anything you say, can or will be used against you. Pull out your cameras and shoot the motherfuckers.” Add to it that the entire crew; Pete, Libby, Rick and more, are entirely on board with holding police accountable and we have a win, win situation. I rocked out to that track for days and still do!

If you feel the same way, about “the Anthem” and police accountability as we do, then consider donating $1 to Bulletproof & the Fool and be one of the first to get 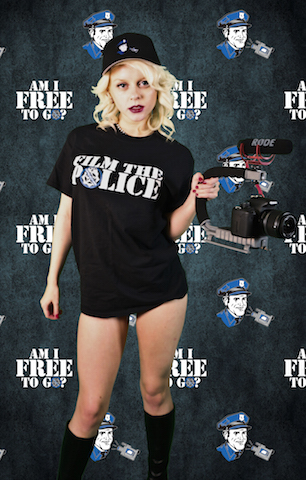 your digital copy of the song. 25% of each donation goes back to the CopBlock Network. Which puts those who contribute to the site here in a much better position to spread the message that, “Badges Don’t Grant Extra Rights.” To get the songs into as many hands a possible, we’re going to give it away for FREE to anyone who signs up for the CopBlock Network. Simply add the CopBlock Network and The Anthem to your CopBlock Store cart, enter the code bptf and you’ll get $1 off your purchase – making the song absolutely free! Order a CopBlock.org Shiny Badge AND download the song we’ll give you 10% off your purchase, use code bptf2 (must have both items in cart of code(s) to work).

*NOTE: “the Anthem” will be emailed to you after your payment has been verified. This normally only takes minutes but could take up to 2 hours with some payment processors. Any questions contact store[at]copblock.org