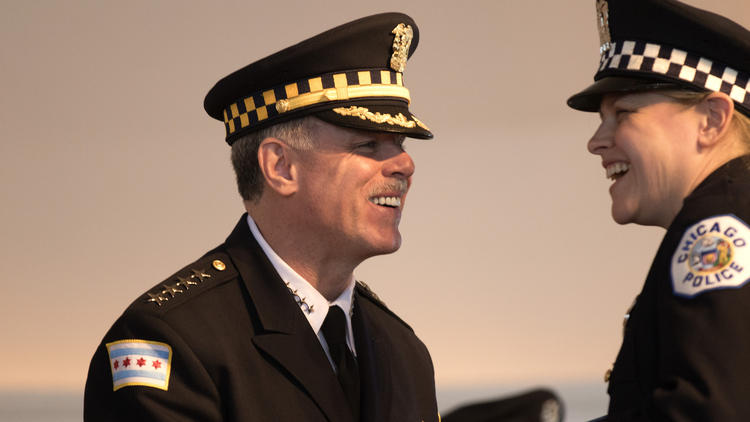 Dante Servin was off duty when he shot Antonio Cross and grazed his hand as a result of the shot. Of course Servin claims he thought Cross had a firearm but the reality was that he had a cell phone and Servin’s bullet had also struck Rekia Boyd, a 22-year-old woman standing nearby, in the back of the head. Last week a judge ruled that involuntary manslaughter charges did NOT apply since prosecutors couldn’t prove Servin acted recklessly. Further noting that the proper charge should have been murder. As messed up as that sounds, letting a guy go because he actually should have been charged with a higher level crime, the Top Cop of Chicago – Garry McCarthy – decided to put the icing on the cake for us. According to the Chicago Tribune:

“It’s something that should not have happened. Absolutely, positively not,” McCarthy said Monday. “But what I will point out to you … is that Detective Servin hit the individual who he was aiming at. He also happened to hit her.”

McCarthy also said prosecutors’ decision to charge Servin created a “safety hazard,” arguing that “every single officer who’s out there now might be in a position where they hesitate, and as a result, they could lose their lives.”

Ladies and gentlemen, welcome to what a police state looks like.  The top cop in Chicago attempts to justify this accidental death by noting that the individual Servin was aiming at was also shot? Why didn’t he just blame Ms. Boyd for standing where she was at the time? Oh, maybe that crosses the line into ridiculousness for McCarthy though I find it absurd to think that as long as the bullet hits, or goes through, a person the officer intended it to go into, it matters not where it ends up. At least from a legal standpoint? It must not matter that Cross wasn’t armed and that Servin probably shouldn’t have shot at him in the first place either.

McCarthy must have anticipated that question coming and decided to stick his foot even further into his own mouth. Concluding that even charging Servin with a crime created a “safety hazard” and that officers MAY question, or hesitate to make, a decision. We’ve now officially left the police state and have gone into full blown slave world. As if having a few more cops stopping to question, “should I shoot this guy or wait and see if that’s a cell phone, not a gun” would be a bad thing? What’s the worse that could happen? A few cops actually get shot at, actually face some sort of ‘real’ danger or they could realize that taking that moment to think saved not only that person’s life but theirs, as well.

In a day and age where cops are killing people at an alarming rate – just look at the content from this site and our allied pages – to have a few cops second guessing using lethal force, sounds like it’s probably too little, too late. Especially with ‘top cops’ like this nut bag having ‘command’ over such forces as the Chicago Thin Blue Line. Again, this is what a police state looks like.