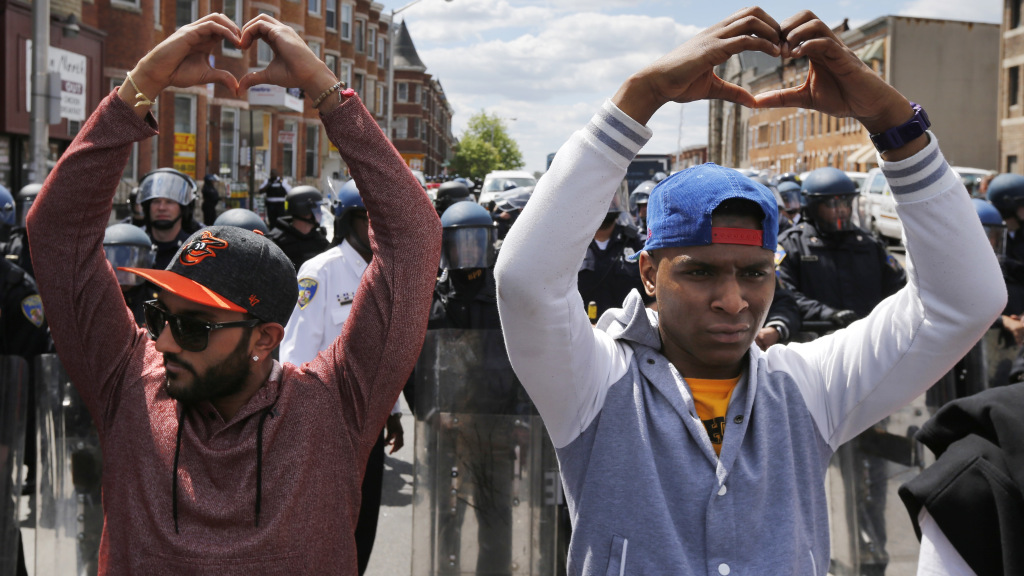 An image of Baltimore citizens forming a defensive line in front of Baltimore police has gone viral and the sheeple of the world are gushing with utterly misguided and misplaced feelings of positivity and inspiration. The photograph depicts what probably are a bunch of really nice men standing in solidarity with police. 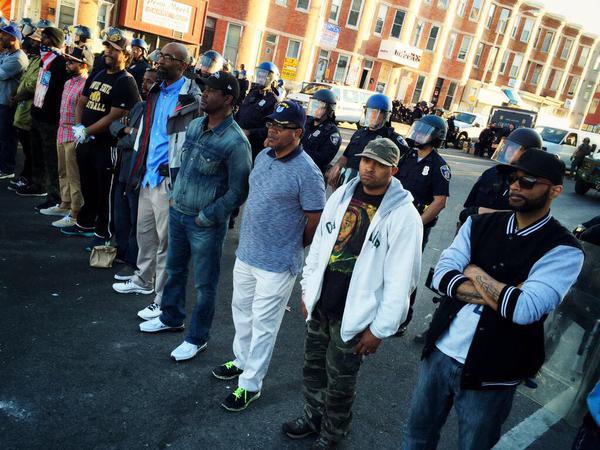 People are practically melting into maudlin puddles of mush over this picture, but upon brief inspection, there is a lot about this “uplifting” scene that makes no sense.

Arguably, the police deserve every ounce of the weak and inconsistent criticism Americans occasionally decide to steer in their direction. Statistics have shown police are far more likely to rape women than the average person. They are also more likely to commit murder. These statistics compare police commission of crimes to that of the average person – meaning bums, gang members, and other degenerates in society are included in this comparison (see information here, Figure 10). Police are also far more likely to beat their wives and girlfriends (see here). As a collective, they are not a particularly admirable group, though certainly every person, police officer or not, deserves to be judged as an individual.

Yet, the justice system is one that allows for qualified immunity so that police officers are not personally liable for various acts of abuse taken on the job. It is one that literally has codified ignorance of the law is an excuse for police abuse. In the wake of the Walter Scott shooting, the mysterious death of Freddie Gray while in police custody, and other usual police harassment and abuse, police and the system to which they belong are rightly scrutinized. With mainstream media almost always backing police reports and accounts, it’s difficult to understand why anyone would feel the burning need to openly demonstrate support for police at this time, and under these circumstances.

So why these fine, unarmed, gentlemen in T-shirts would place themselves before police in a display of such fashion is beyond me. Police are often described by their supporters as “heroes.” Yet, there seems to be little heroism in this row of well-funded, armed, trained, helmeted men allowing unarmed civilians to form a defensive line in front. Even the most ardent police supporters should agree there is something a bit cowardly about letting unarmed, untrained civilians form a blockade for you when you have helmets, guns, among other weapons.

Police are human beings, not gods; they do what they do for the same self-interested, petty, and materialistic reasons as every other human being on the face of this planet. They get paid to “protect” people. It is their job, and they collect a paycheck to do so; police departments collect this paycheck whether they satisfy their customers or not, because taxes are not optional. Yet in this picture, we see men who pay compulsory taxes to fund the police, who are doing the officers’ jobs for them free of charge for inexplicable reasons; and here we see those police, allowing unpaid, unarmed, untrained, civilians to stand before them as a line of defense. This is not inspirational; it is bizarre and pathetic.