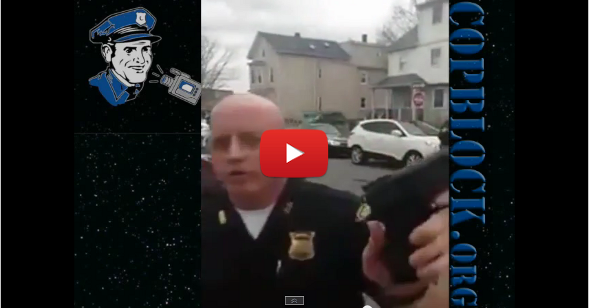 Today I received an email from Evan Allen, of the Boston Globe, inquiring about the video and post I published titled, “Boston Officer Waves Gun in Videographer’s Face.” After explaining to Evan how I got the video (see above) I sent her the Facebook link to the person, later identified as Brother Lawrence, that I believed captured it. Even though he had not responded to my inquiry.

According to Evan (and posted to the Boston Globe):

Boston police have launched an internal affairs investigation into an incident involving a 61-year-old man who videotaped a police sergeant waving what appeared to be a seized firearm in his face as he filmed officers stopping a teenager on a Roxbury street this month.

The gun was a realistic-looking toy, according to police, but civil rights advocates and the man who recorded the video say that does not matter. The video shows the sergeant questioning the man about why he was videotaping, saying he did not consent to be taped, then walking over and holding the gun up close to the camera, saying, “That’s why we’re here.” The sergeant does not point the gun at the man.

“His intention was to put that in my face and produce fear. That was his intention,” said the man, who asked to be identified by the name Brother Lawrence, because he said he feared retaliation for speaking out. “I thought my life was in jeopardy there.”

Boston police spokesman Lieutenant Michael McCarthy said the sergeant depicted in the video, Henry Staines, has been counseled that citizens have the constitutional right to videotape police officers doing their jobs. An internal affairs investigation has begun, McCarthy said, and Staines will meet with Lawrence, Boston NAACP President Michael Curry, and Superintendent-in-Chief William Gross on Friday. A reminder has also gone out to all officers that citizens can legally videotape them, McCarthy said.

“The officer knew… that the firearm was a toy firearm,” said McCarthy, who said realistic-looking fake guns are a growing and dangerous problem that put youths and police in danger. “It appeared as though his frustration at that point was that this young child who was out there carrying this firearm could have been shot for carrying a toy. Not to frighten. Not to threaten the person taking the video. But to educate them on the fact that these things were out there.” 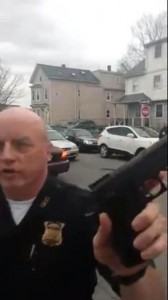 So the officer’s name is Henry Staines and the gun was a fake. Lieutenant McCarthy says that Staines was attempting to educate people that ‘these things were out there.” AH, ok? There are toy guns in the world. Did McCarthy ever think that maybe Brother Lawrence was trying to educate someone too? Thanks to his video there will be an internal investigation – which isn’t my goal, but cops hate them – and this cop, and maybe many more, are going to get an ear full about people’s right to film. Sounds like someone got an education alright, but I don’t think it was Lawrence.

I hope Henry Staines learns to accept that people are going to film him in the course of his duties and that if he really wants to address the problem of toy guns on the street, than do that. Don’t try to intimidate people who are merely recording people in public space. Oh, and thanks for not shooting the kid with the toy gun. I guess it could have been worse had you lost your temper sooner.