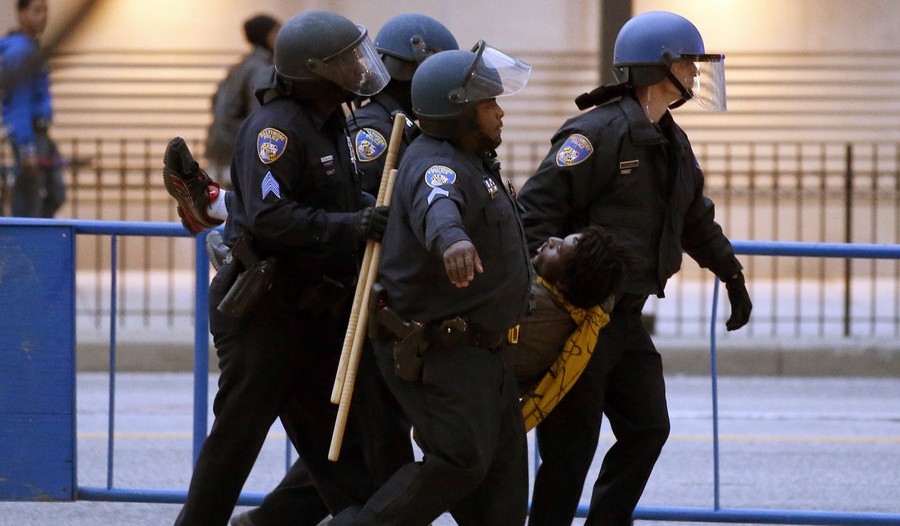 More than 200 people arrested this past week in the Baltimore riots were not charged, after Maryland’s new Republican governor, Larry Hogan, suspended the state’s habeas corpus law via executive order. The law limits detention without charge to 24 hours.

Remarking on the suspension of the most vital legal protection of all time, Hogan asserted the measure was “necessary to protect the public safety.”

The treatment was imposed after protests raged over the death of 25-year-old Freddie Gray, who died in police custody earlier this month.

Also implemented by the governor as part of a state of emergency, a 10pm to 5am curfew on Tuesday, enforced by 1,500 national guard troops. Police in riot gear drove off a crowd with teargas and smoke grenades, after hundreds of protesters defied the mandate.

The city is also imposing bail bonds of up to half a million dollars on the city’s poorest residents.

101 of those detained without charge were released from detention on Wednesday night after dozens of petitions filed with the city’s public defenders led to a retreat by state and local officials.

Many of those released had been held for over two days with no charges filed against them after police failed to produce a basis for their arrest.

Baltimore Deputy District Public Defender Natalie Finegar said 82 habeas corpus petitions were filed to the attorney general’s office before the decision was made to release 101 “detainees.”

Baltimore police commissioner Anthony Batts admitted that the legal time-frame had elapsed for police to hold the prisoners, but said he intended to relaunch investigations against them in the future.

Finegar said the decision to hold so many “without any respect for due process [could] further shake the confidence in the criminal justice system for those arrested.”

She said many of those detained had complained of the harsh conditions in jail and said they went 18 hours without food before being given inedible bread.

Protests in Baltimore remained peaceful throughout Thursday. Around 2,000 people rallied around City Hall and marched to Penn Station, but dispersed before the 10pm curfew.