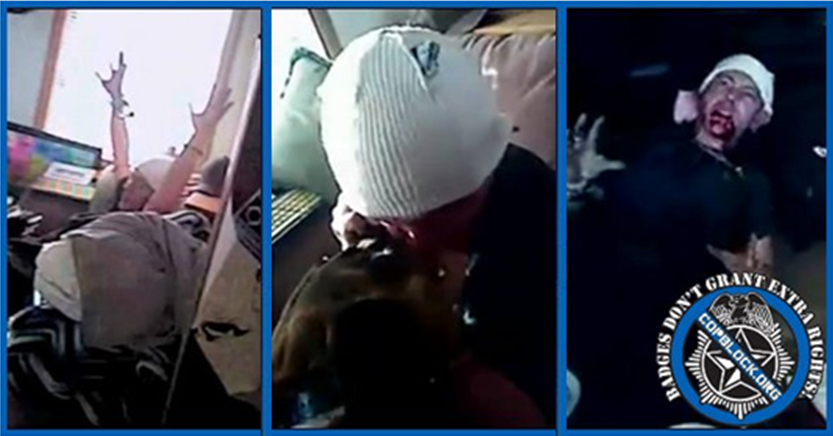 Body-cam video has been released as a part of a lawsuit filed against the West Jordan Police Department in Utah, showing an officer kicking in a door and releasing a police K9 on a man seated, surrendering on his couch, with his hands raised.

The video shows Lee Hoogveldt seated on a sofa after police enter his home on March 24, 2013. After commands from officers, he raises his hands in the air before a police dog jumps up and chews on his face for 15 seconds.

Hoogveldt is then pulled into a nearby room by another officer before being placed face down and handcuffed. During the process the dog continues to bite him. Large amounts of blood can be seen covering his face.

“I didn’t dare to move,” Hoogveldt said. “I put my hands up and froze. If I would have blinked, I thought I was going to get shot.”

Police say they’d been called to Hoogveldt’s residence by neighbors who’d felt threatened by him and were concerned about a fire burning in his back yard.

Police maintain the officers were in danger and that appropriate force was used to take Hoogveldt into custody.

“To protect the neighborhood, they had to go in and secure Mr. Hoogveldt,” West Jordan Sgt. Dan Roberts said. “The fire department could not respond to take care of the fires.”

The footage clearly shows a surrendering Hoogveldt but Roberts asserts the releasing of the animal was justified as Hoogveldt “could have easily been hiding a weapon on him.”

The man filed a civil rights lawsuit against the department in Federal Court Thursday.

“There’s a right to be free from unlawful entry, under the Fourth Amendment,” Hoogveldt’s attorney Robert Sykes said. “We have a police officer without a warrant, kicking down a door, and going in someone’s home.”

Sykes added, “at the time and place this force was used, there was no justification at all to sic a police dog on somebody.”