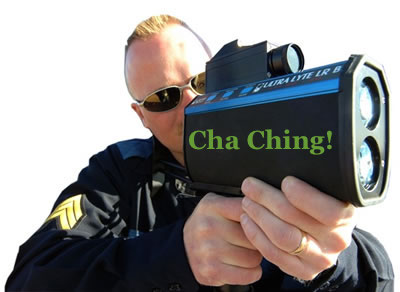 We have claimed on many occasions that the duty of police is rarely to serve and protect average citizens as much as it is to create fear, protect the rich and collect revenue. The going-ons of one small town in Colorado, where a single cop has written tickets earning 93% of the towns revenue, illustrate just how accurate these claims are.

Brad Viner is the only police officer in the town of Campo, Colorado. The 400 traffic tickets he wrote last year accounted for 93 percent of the 107-person town’s revenue. “Basically, the police department pays for the town,” he told the Grand Junction Free Press, seemingly without irony.

Viner, KUSA reports, essentially polices a speed trap: he sits in an unmarked car at either end of the town and tickets people as the speed limit on Highway 287 drops from 65 MPH to 30 MPH. Those tickets, Viner says, are all issued out of a concern for “public safety.”

“Everybody is treated the same. If you’re 10 (MPH) or over, you should get a ticket,” Viner told KUSA. “If a kid darts out in the middle of the road from one of these sides streets, that 10 over could cost a life.” 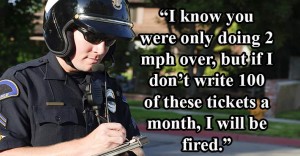 Campo previously had a three-officer police force—drama led to Viner being the only officer in town. In 2013, Campo’s then mayor, Ray Johnson, was busted with his twin sons siphoning $5,000 worth of gasoline for their personal vehicles. One of Johnson’s sons was also one of the town’s three cops. The brouhaha surrounding the gas siphoning scandal apparently led to the resignation of another Campo cop, leaving Viner to stand alone.

According to Rocky Mountain PBS, the state average for town revenue made from traffic tickets is 4 percent—Campo, along with a handful of small towns in Colorado, rake in more than half their budgets in traffic fines.

The town’s mayor, Tim Grey, has openly admitted that Campo’s budget is almost entirely dependent on Viner issuing those tickets.

“Yes, if we don’t have revenue coming in, and presently, most of our revenue comes in from tickets, then we won’t have the money to pay anyone,” he told the Free Press.

Viner even told KUSA that he had been ordered by the Grey to write more tickets, or be fired; Grey, naturally, denies ever saying this.

Campo is not the only town in Colorado that employs police as revenue generators for the purpose of propping up insolvent local governments. The Grand Junction Free Press reports that this sort of thing is not at all uncommon in small Colorado towns. Many towns earn a large portion of their income from tickets issued for traffic violations and other victimless crimes. A piece of legislation is being introduced that would prevent a township from collecting more than 30% of its revenue from such schemes. While officials tout ‘public safety’, speed traps and other revenue generating schemes often target those driving in murky areas of the legal speed limit, or in other dubiously sneaky methods.

Colorado is not alone. All across the country police are spending more time in activities which generate revenue than they are solving actual crimes. Michael Heise, of CopBlock.org, recently reported that the rate at which violent crimes are being solved has dramatically decreased at the same time as our prisons gorge themselves on victims of the Drug War and revenues generated by police departments nationwide skyrocket. Police no longer act as public servants so much as public threats and are associating less and less with civil rights and accountability and more and more with civil accountants.