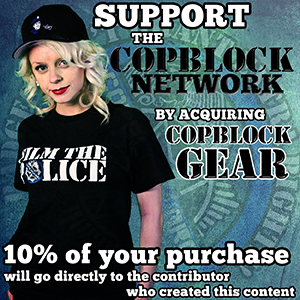 Zanesville, OH is where I’ve been spending more of my time since being caged for a day by the city judge, as seen here. I originally came here to help get Zanesville CopBlock off the ground, by doing community outreach and organizing a monthly meeting. Instead I’ve been helping Herb Newton with his court case involving the Zanesville Police (ZPD) and dodging trolls threatening violence against those of us who film them.

My involvement in this started when Herb was arrested for “obstruction of justice” while trying to help his neighbor by filming a dispute between them and a person who stole from them; more on that in a moment. Herb’s arrest that night, lead to my caging the following day (as I went to inquire about his arrest) and then to a night of CopBlocking in Zanesville upon my early release from jail. Then last week, someone submitted a post, via CopBlock.org’s submit tab, questioning Jon McCoy’s (Zanesville Police Officer) posts on his (now deleted) Facebook page. I made a quick post about it and, just like that, became one of the most hated people in town. That’s according to the comments on the Zanesville CopBlock Facebook page anyways, yet, when I’m out and about in town, I only meet people who support filming the police.

While the haters cry, “How dare you film the police and disrespect them.” Others have told us (myself and other CopBlockers) to, “get a life”,”stop breaking the law”, “don’t do drugs and you won’t get arrested” and other ridiculous things that trolls claim is a “better” use of our lives. The personal attacks, or assumptions, really don’t bother me because I’ve been doing this for far too for that to have an effect on me. If I was looking to win a popularity contest, I would have started CopLove.org instead of CopBlock.org. Yet, what I’m about to show you is exactly why I do what I do. Why I’ve made this my life, and my job, and why you – yes even those of you who hate us, should always FILM THE POLICE! It’s also why your cherished cops aren’t as nice as you think they are.

In the video below, you’ll see Officer Tignor and Moore arrest Herb for obstruction of justice on April 9th, 2015. The officers claim that he was interfering with their investigation and that a woman was having issues describing her accusations to them due to Herb’s recording. Below is the video footage of that arrest, as you watch it, try to pinpoint where Herb is obstructing the investigation or any time where he doesn’t comply with the officers orders.

That’s a lot to absorb, so let’s take it from the top.

Herb’s neighbors asked him to film because they were most likely going to call the police after a friend of theirs stole a tablet from them. Herb was happy to help and brought both his cameras to his neighbors house across the street. Before the cops arrive, no one is telling anyone to back up or to stop recording and once the woman mentioned she had been raped, Herb offered to help her, repeatedly. It wasn’t until the police showed up, particularly Tignor, that the filming or Herb were even a problem for anyone. Yes, Moore asked Herb to back up twice and both times he did. In fact, even after Tignor said, “you’re this close” Herb complied and at that time decided to leave.

That’s when Herb walked towards his bike, so that he could gather all his belongings and leave the property. Even though, IMO, the location of Herb’s bike was in no way interfering with the investigation going on, Tignor once again engages Herb and Moore quickly joins him. Let’s not forget that there’s a woman who’s claimed to have been raped, who has physical evidence of a crime on her body, yet, both officers are giving their attention to Herb, who has done nothing but follow their orders when asked, each and every time. So, why did they arrest Herb?

It took us nearly three weeks to get the cameras back from the city prosecutor. We achieved this by first asking for discovery in Herb’s case, followed by a specific request to the prosecutor for copies of the footage and/or cameras themselves and finally a motion to compel (as our second letter was never addressed) with the court. Before the motion to compel could be ruled on, the prosecutor told Herb he could come and reclaim his property. We went to the courthouse to retrieve Herb’s cameras and quickly noticed that one of his cameras (the backup) seemed to be missing the last file. His other camera appeared to have all of the footage on it and this immediately struck me as odd. Why delete one perspective but not the other? Especially since the same person was holding both cameras? It didn’t add up, so I attempted to recover/repair the file.

While waiting on the recovery program to recover/repair the tampered file from camera 2, Herb and I watched the clips from camera 1. At the conclusion of camera 1’s footage I thought, “wonder what was on camera 2 that they had to delete.” IMO, the most crucial evidence clearing Herb of interfering was left intact, because according to both officers reports they claimed to have asked Herb several times to “LEAVE the area.” This is a flat out lie as Moore only asks Herb to back up, which he does, and when Tignor tells Herb to leave, he tries too but is arrested. Add that Tignor was attempting to provoke Herb from the start by nearly striking him with his cruiser and when he said, “You’re this close. Got it?” This clearly implies that Tignor was already looking to arrest Herb. Even Moore said, “you know what, with all this you’ve been doing, you’re going to jail on this one.” So without the additional audio, if you pay close attention to the details, you can see that these officers clearly dislike Herb and used their powers as police officers (Zanesville Gangsters) to punish him for doing things they don’t like.

And Tignor seals the deal when he forgets to shut the camera off and is recording saying, “I took care of that problem quickly.” Followed up with, “Hey, fuck him… he wants to just run his mouth. I’m not having it. I’m tired of it.” Seems Tignor believes recording the police is a ‘problem’, that needs to be taken care of quickly, and that if you want to exercise your freedom of speech, by running your mouth, he’ll abuse his power as a police officer to jail you.

The video of the interaction and arrest alone, which shows Herb actually trying to help the alleged victim and the cops doing anything but (Tignor even shrugs it off stating, “a rape that happened yesterday.”), should be enough to clear Herb’s name, but with the additional commentary by Tignor I see no choice other than for Emily Tarbert to do what’s right by dropping the charges. The Zanesville police department should also consider investigating who tampered with the footage, because they suck at it and if they’re going to tamper with evidence they should do it properly. Or they could just stop arresting peaceful people, who are merely recording them (and at times telling them off, which is NOT a crime).

Herb has court this coming Wednesday and we’ll be there to cover the hearing. I’ll also be seeking comment from the police department and prosecutors office, your assistance in getting some answers would be greatly appreciated. Herb’s nephew, Richard, was also arrested the same day after he voiced his displeasure towards Tignor, and it seems the police lied in their reports about his arrest too. Meaning this ZPD Duo jailed a man for recording them (that day and in the past) and another for freedom of speech. Someone has some explaining to do….