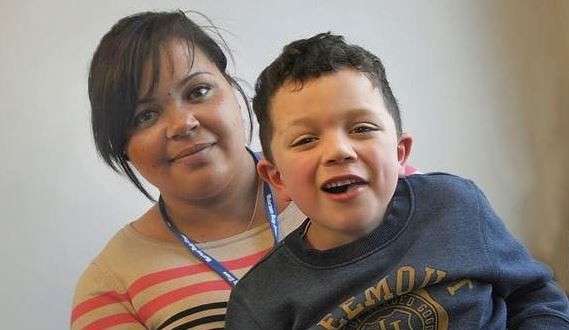 A 5-year-old special-needs student at Philadelphia Primary School in New York, was put into handcuffs and ankle shackles before being placed in a patrol car and taken to Samaritan Medical Center in Watertown, Wednesday, for a mental health evaluation, state police say.

Police defended their actions saying the child, Connor C. Ruiz, allegedly posed a risk to himself, students, school staff and officers, after troopers responded to an incident at the special-needs classroom reported by Jefferson County’s 911 dispatch center at 11:08 a.m.

Police described the child’s behavior as “out of control” and “combative,” saying Conner was “screaming, kicking, punching and biting” when troopers arrived.

Todd said the child’s teacher used an approved technique to physically restrain him for about 10 minutes until police responded.

Trooper Jack Keller, public information officer for Troop D in Oneida said school staff notified police that Connor was jumping “from cabinets and desks, was attempting to jump out of a window… was stabbing himself with pencils and eating paper.”

He said responding officers, Troopers Steven Watkins and Keith Kloster, tried to restrain the child, using first verbal, then physical techniques, but they were unsuccessful. They then decided to take him to Samaritan for a mental health evaluation.

“Our concern was his safety, of not only himself but the staff he was dealing with and the other students in the class where he was,” Keller said.

Keller says shackles were placed on Conners feet because he “was attempting to kick and be physically combative.”

Parents, Chelsea A. and Ryan R. Ruiz of Fort Drum, contend that staff at the school handled the situation improperly and allowed it to escalate unnecessarily by calling police.

The Ruiz’s say their son was emotionally traumatized as a result of the incident and is afraid to return to school.

Connor, who had been enrolled in the special-needs class for about two weeks after attending a mainstream class at Evans Mills Primary School, was diagnosed during the past year with attention deficit hyperactivity disorder, obsessive compulsive disorder and oppositional defiant disorder, Mrs. Ruiz said.

She says professionals at Samaritan Medical Center quickly decided Connor did not need to be evaluated by a psychiatrist.

“The doctor who decides whether a person needs to see the psychiatrist decided he was just being a boy and threw a tantrum,” Mrs. Ruiz said. “I was appalled… no one was going to think it was OK to handcuff a 5-year-old.”

The Ruizes say they plan to file a lawsuit against the Indian River Central School District for “emotional distress, child cruelty and endangerment.”

Conner has yet to return to school.