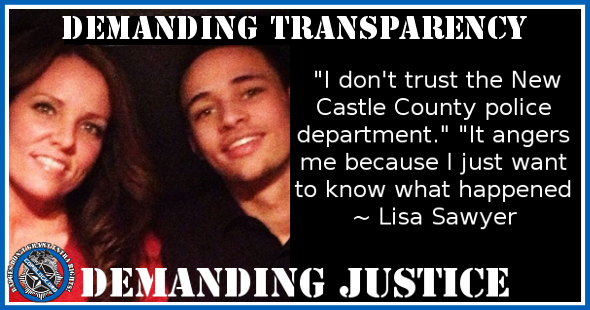 A Mother’s Demand For Justice

Lisa Sawyer, mother of 20 year old Ty Sawyer, who died on April 26th after what police describe as a  “mutually agreed-upon fist fight” supposedly with the son of two ex-police officers, is demanding transparency and justice concerning the events around her son’s death. “It angers me because I just want to know what happened, “My son cannot speak for himself, so I will speak for him and I will make sure that this is handled properly.” In a recent video interview, Lisa says “I’m not out for blood, my son’s not just going to die and I’m gonna let them brush him under the rug. Someone will have a consequence to this, and I WILL NOT SLEEP UNTIL IT HAPPENS!”

County Police Chief Elmer Setting gives his empathy to Ty’s mother, but made sure to emphasized that “his agency” is conducting a “thorough investigation” in cahoots with General Attorney Matt Denn’s office, and that at this point no charges should be filed.

“We are waiting for scientific reports but as of now we don’t have enough evidence to file charges”, “five separate witnesses have said Sawyer and the other man were mutual combatants.”,  “Her son’s death is absolutely tragic and I understand she’s upset and blaming the police.” He claims it’s a very popular thing to do and that he doesn’t believe the fight itself is the cause of death, “The trauma is not there to say this was a homicide.”

Kimberly H. Chandler,  spokeswoman for the State Department of Safety and Homeland Security, overseer of the newly named Division of Forensic Science,  must also believe that the initial autopsy report didn’t demonstrate any “trauma” agreeing with  GA Matt Denn and Chief Setting . “The manner and cause of death are pending further studies,” including the toxicology report. Keywords: Cause of death pending FURTHER studies. Chandler concludes, “The final report should be ready in about three to four weeks, but it could take longer.” Presumably a waiting period due to the toxicology report.

Why Are They Not Releasing That Initial Autopsy? Where is the Transparency?

At minimum, the family should be allowed access to documents, current reports, and photographs. Investigators are “allowed” to make claims about these documents. They should be showing them to the family at the same time. Let’s not sit back and wait for a toxicology report to be able to see the autopsy that the GA, Chief, and Spokeswoman for the State Department of Homeland Security  are all stating, “shows no trauma”. If the coroner has determined there is no trauma, then the coroner should come out and explain this to Lisa and demonstrate that there was no trauma. After all, it would show  the  innocence of the accused for having caused physical trauma to Ty, right? An immediate private autopsy should be demanded. There is no good reason the family shouldn’t be shown what investigators are commenting on.

Show the Sawyer’s the initial autopsy! Trauma would either be evident, or it wouldn’t?  It’s as simple as that.  You don’t get to make a claims off of a report and expect we’ll just believe you without seeing your references. I believe these are just plain BS tactics!

Why No Arrest? Why Not A Single Charge?

After speaking with Ty’s friends, Lisa believes her son was  killed and that the consequences be fulfilled for such actions that lead to another’s death. (SCROLL DOWN FOR DELAWARE CODE) You are responsible for your actions.  Sawyer also said the lead detective was disrespectful to her during the most painful time in her life. She goes on to add a very common phrase spoken regularly by victims families, “I don’t trust the police.” Over and over that phrase gets repeated.  It’s no longer about trust in an individual officer, it’s trust being lost altogether, one department at a time.

According to Lisa , Ty had a previous discussion with her after Pat,  had bashed in their mailbox, in which he specifically told her he didn’t want to fight him.

Where is the HEART in all of this? I regurgitate my words over and over. There is no heart in the State. It is a non-person entity that employs people to protect it and to uphold it.  I see no heart when the family of a victim, especially a mother,  is in the darkest time of their lives and are refused to be shown EVERY aspect of a case that so-called “investigators” of the State say they have sole right to. IT”S HER SON!! FAMILIES OF VICTIMS DEMAND TRANSPARENCY AND ACCESS!!! We really don’t need to sit back and ask permission!! WE DEMAND IT!!! We do not allow them to tell a a mother NO! It is not their place, especially under these types of circumstances where police are clearly under the spotlight across the nation.

Remember that Lisa said  “My son cannot speak for himself, so I will speak for him and I will make sure that this is handled properly.” Well, she does not have to speak alone. The seemingly small voice that she uses to sing her heart out with becomes a beautiful choir heard across the land when we begin to sing along with her in unison!!

Help be the voice of Ty and DEMAND they release actual information to the family, not just a mere verbal reiteration they claim to have derived from the information.

Physical trauma refers to any physical injury. In medicine, however, the words trauma patient usually refer to someone who has suffered serious and life-threatening physical injury potentially resulting in secondary complications such as shock, respiratory failure and death.

Regardless of Ty’s “mutually agreed-upon fist fight”, there is no defense built in the Delaware code to protect one who has committed bodily harm and or killed another person with violent actions.

At minimum there should be a charge of disorderly conduct according to Delaware code. If what friends that were there say is true and with the unwillingness of the State to fork over known information in a timely fashion and demonstrate transparency, what are we expected to think? We already know and understand the length and strength of your tightly knit circle guised as the “Thin Blue Line”, a comradery boxed in pride.