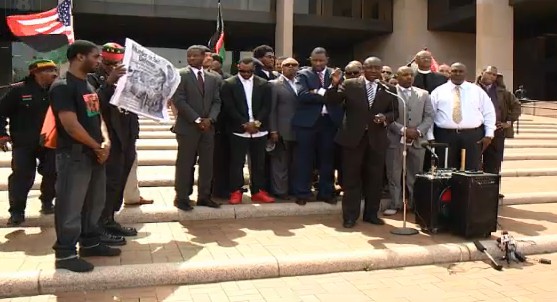 The family of Tamir Rice and their attorneys gathered outside the Justice center in Downtown Cleveland to ask the city officials, “How Long?” As in how long until we find out the fate of officers Timothy Loehmann and Frank Gramback, the officers who murdered Tamir Rice five months and 12 days ago, on November 22nd 2014.

It’s been five months and 12 days since the shooting. The investigation is in the hands of the Cuyahoga County Sheriff’s Office.

As a resident of Parma, a Cleveland suburb, and having had the Parma police bring my step son home to me, rather than shoot him, for carrying toy guns around town. This case outrages me the most. To know that these two officers are still collecting a paycheck and acting as though nothing has happened, really steams my clams! This could have been my stepson, had he run into these cops! This could have been me thirty years ago, when I was brought home by cops for playing with toy guns in the streets.

These officers need to be held accountable! With all the evidence that is available, I can’t imagine how this outcome could be taking so long. I’ tell you what happened right now. Tamir was playing with his airsoft gun, in the park where he played day after day. A park where many kids play. A nosy busybody, who was bored waiting for the bus, decided to pass the time by calling the cops on him, never imagining they would kill him. Officers Loehmann and Garmback roll up on Tamir so close to him, they could smell his breath, and open fire on him before even getting out of the car.

They then tackle his sister, who was trying to be by her dying brothers side and put her in back of a cop car, where she can watch as her brother lay dying. Some 20 minutes after shooting Tamir, they get an ambulance there to attend to the wounds they inflicted upon him, but to no avail. Tamir succumb to the gunshots the next day in the hospital. The two heroes who shot him, offered him NO first aid, NO comfort, no nothing for twenty minutes. When help finally arrived, it was EMTs who came to his aid.

Greater Cleveland CopBlock has raised 400$ for the Rice family. I can only offer my condolences and the money. Unfortunately nothing I can do will ever bring Tamir back to us, and more importantly to his family. Rest in Peace young man. You did nothing to deserve this, is the best I can do.