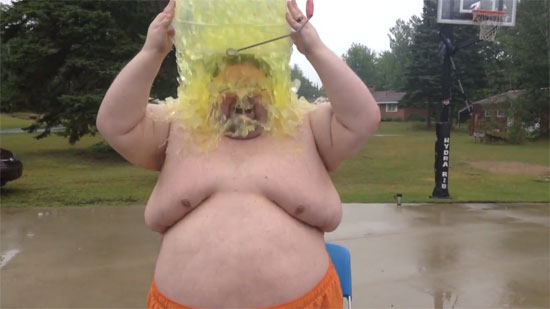 In July, Robinson allegedly appeared in a video posted online in which she was shown picking up and pouring a 5-gallon bucket of ice water over a fellow officer as part of the ALS “Ice Bucket Challenge” that swept the nation last summer. She was out of work on a disability claim for a lower back injury at the time, the DA’s office said.

Robinson was also accused of fraudulently receiving disability pay for more than year related to a shoulder injury, a spokesman for the DA’s office said. That alleged crime occurred in 2012.

Two counts of insurance fraud were filed in connection with each instance, according to a criminal complaint.

Robinson faces up to six years, four months in state prison, time that would be served in county jail, the DA’s office stated.

The end result of this entire scheme is that taxpayers were subsidizing a fraudulent servant. While they will not be receiving that money back, they will now pay the cost of processing and jailing Officer Robinson on top of their initial losses. And this is justice. This is how our system works. No time spent in jail will earn the hardworking people, who had to sponsor this entire debacle, their money back. Knowing that another human being is locked in a cage hardly fixes that or makes anyone worth talking to feel any better about it.

Perhaps the saddest part of the entire incident is that the Ice Bucket Challenge is still not done terrorizing well meaning buffoons almost a year after that unfortunate phenomena occurred. As I bonus for the comment trolls I will share my thoughts from last fall on that bygone social meme:

First, let me talk about a few reasons usually given for criticizing this phenomena.

a) ‘It is a waste of clean water in a world where many die of none.’

While it is a shame that many people suffer and/or die from a lack of clean water all around the world, I have yet to see this criticism being made by anyone who has ever lacked for water. In America almost all of us waste water on a daily basis. The water wasted by the ALS IBC is inconsequential in comparison to our every day waste. This is not a valid criticism.

b) Depending on reports only ‘7-50% of the funds raised will actually go towards researching a cure for ALS’.

This is a valid complaint, and one that could be lodged against almost any charitable or ‘non-profit’ organization. Most of these institutions are are highly profitable to those who administer them. Wages are profits. Do you think these people are working for fry cook wages? No, they are highly paid marketers. Before you give your money to any organization, do some research. Not all charities are equal.

We can measure the objective good that results from this and if we did, my guess is even at 7%, this is more money than ALS research has ever seen at once. That has gotta help. Perhaps not as much as advertised, but again, it is a marketing campaign. Since when do we expect marketers to fulfill the expectations they create, warranted or not?

d) It is narcissism disguised as kindness.

Well, of course it is. Almost every one of these philanthropic trends are based on the principle of narcissism and ego. When you receive social rewards, you are more likely to participate in ‘altruistic’ behaviors. Yet there is no altruism. When we do nice things for others, it makes us feel good. Everyone wins. I think the problem that critics have with this issue is that the ALS marketing team know this, while most of the good-hearted people participating do not, at least not in a sense where they are consciously connecting these things. It feels like people are being taken advantage of or controlled in stealthy ways. They are. That does suck, but this criticism extends into most public spheres, so maybe this is not the battle for that war.

There are some real limits to what we can be aware of at any given time. Go ahead and look up the number of human ailments for which we do not yet have a cure. Now tell me how long you can maintain awareness of that list. You have forgotten already, haven’t you? We could not possibly all be aware of every problem in the world all of the time and even if we could, we probably should not do that to ourselves. Of course this ‘awareness’ thing is silly, again, it is simple marketing. But for just a moment in time a bunch of extra money goes towards research and making the dreams of the marketing teams behind the IBC come true. And maybe some people suffering from it get a little hope and a little more humanity for awhile. That is certainly meaningful. Certainly some good will come of all of this, even if briefly.

Now, here is valid criticism of my own. The ALS IBC uses compulsion, coercion and social bullying to accomplish its task. I find this disturbing and i suspect it is the underlying reason that most people consciously or subconsciously harbor for distrusting the phenomena. Once you are nominated there is an expectation that you must participate, especially since you were called out publicly on social media. Many people do not like being put on the spot. It makes them uncomfortable. It makes them reject whatever reason it happened no matter how great everyone else thinks that reason is. And guess what, that is okay. Nobody should feel bullied into doing a good thing. That sucks the goodness right out of it. Would this have been as effective if you merely encouraged others privately to participate? Probably not. But that does not make it okay. Whether or not anybody wants to participate in a philanthropic trend should be their own decision. We need not use social pressures to force some, or critique others for how empty their participation really is.