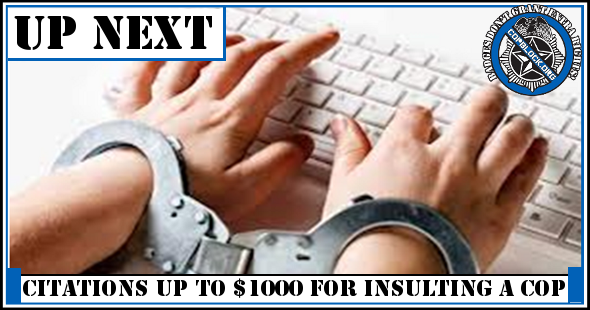 A town in southwestern Quebec criminalized online insults of police and municipal officials after the town-council voted unanimously in favor of the measure yesterday.

In Granby, Que., a town with about 60,000 residents situated 80 kilometres east of Montreal, it was already illegal to insult local government employees. Monday however, the town council strengthened that bylaw to include online insults as well.

The move came after town officials discovered a Facebook page critical of town police, called Les policiers zélé de Granby, (The Zealous Police of Granby) which has over 7000 likes.

Deputy Mayor Robert Riel conflated insults with threats when he voiced his support for the law.

“In my opinion, if I threaten you via my keyboard, it’s as though I am making that threat right in front of you,” Riel said. “For me, it’s the same thing.”

Obviously, the measure is a gross violation of free-speech and freedom of expression.

“What you’re going to be having is a trial of speech every time a municipal employee or a policemen considers himself insulted. I think this is absolutely terrible,” constitutional lawyer, Julius Grey, said.

“I don’t think it’ll stand up, I hope it doesn’t stand up, to judicial review. I hope it gets struck as soon as someone is charged under it.”

Granby citizens are outraged at the thought of being ticketed for online comments.

“I just couldn’t believe it. There’s no way that they [sh]ould even imagine passing such a law,” Granby resident Gail Sheppard said.

“In what decade are we living in? Social media exists. Yes, it exists, but it exists for everybody, and I don’t know how police have to be given more respect than anybody else.”

Granby police would not comment to local reporters on the passage of the law but did say they were “eagerly awaiting the result of Monday night’s vote.”

Granby is the first town in Quebec to have such a law that extends to the internet.