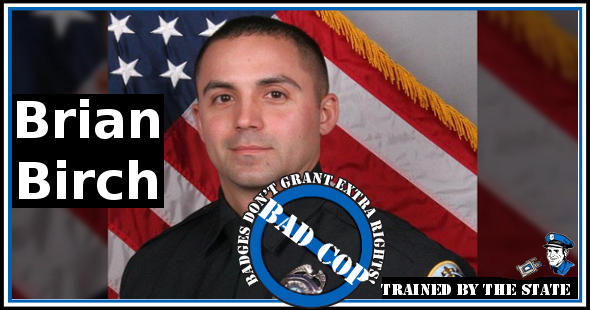 Metro Nashville Police Officer Brian Birch has been decommissioned and was assigned to desk duty on Monday [May 4], less than 24 hours after he was caught on bystander video (SEE ABOVE) ordering a man out of his car at gunpoint during a traffic stop by saying, “Open the d— door now. I’m going to shoot you in the f—— face. Open it now!” Metro-Nashville Police Department spokesperson Don Aaron told The Tennessean, “The language used by Officer Birch was not appropriate and he has been decommissioned while that is sorted out.”

The incident began when police pulled over former Tennessee Volunteers football player Walter Fisher Jr. after bystanders, who had confused him for a gunman after seeing him use a personal defense weapon to stop a car burglary in progress, called 911 and reported his vehicle and description. Fisher has a valid handgun carry permit.

“There was a call to Casa Fiesta restaurant at 2:18 Sunday afternoon in regard to a man carrying what the citizen thought to be an AK-47 and a pistol… According to a report to a dispatcher, people were being threatened,” said Aaron. He continued, “During the ensuing investigation, it was determined that Fisher was at Casa Fiesta eating when he saw two persons burglarizing his car. Fisher, who was wearing the pistol on his waistband, went outside to confront the burglars. One of them fled; he caught the other. Fisher then removed his shotgun from the car and was preparing to escort the burglar he caught to the adjoining motel in an attempt to retrieve items taken from his car. In the process, the second burglar broke free and ran away. Fisher did not pursue him, nor did he notify police of the auto burglary.” Fisher was not found to be in possession of an AK-47.

Walter Fisher Jr. told WSMV-TV, “I know the man’s trying to do his job, but the man could’ve shot me… You should never tell a person you’re going to shoot him in the f-ing face. You’re an officer of the law. I look to you to uphold the law, not break it.” Fisher, who is haunted by the incident, says he does not want Birch to lose his job, but that decommissioning does not go far enough. He hopes that the department will retrain officers to better handle future situations.

“This was a very intense situation for all involved. The officers were extremely concerned based on the information they received. Domestic situations can be volatile and unpredictable. No doubt, adrenaline was pumping on both sides, but still that doesn’t negate the error in language by Officer Birch,” said police representative Don Aaron.

The Metro-Nashville Police Department, which has a reputation for strictly disciplining its employees, appeared recently in stories on TruthInMedia.com when its officers refused an illegal Secret Service request to falsify a warrant and when its Chief Steve Anderson opted against engaging in a militarized crackdown on Ferguson protesters.