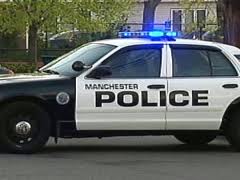 Recently I was found guilty in my Chalking 8 trial, while highlighting those bogus charges we (Pete and I) met Frank and Mike, who took this video of Manchester Police Officer Murphy. The video went viral and received attention from several news outlets. Instead of taking a serious look at the actions caught on tape the city went into defense mode.

The Police, school and local government officials sought to criminalize Frank, Mike and myself. They expelled Frank from school, charged Mike as an adult (over a teenage fight) and charged me with three counts of wiretapping. Crimes the state says justifies caging me, at your expense, for 21 years.

I’ve been through this before in Greenfield, MA and am confident I can present my case, logically. The problem I face in Manchester that I didn’t have in Greenfield is the personal vendetta those in Manchester seem to have for me. After all, I was given the max sentence (with 10 months of it stayed for 2 years good behavior) for ‘resisting’ my arrest.

With that in mind I’ve thought long and hard about how I’d like to tackle this case. I’ve done all the homework, reading up on New Hampshire’s wiretapping law, talking with lawyers, brainstorming ideas with fellow activist and more and it’s come down to one thing, funding. Which is why I made this video asking for your help.

As stated in the video, I think a lawyer would be beneficial to ensure I have fair pre-trial hearings and ‘proper’ (in their eyes) procedure during trial. Considering this will be an expectation of privacy trial – and that public officials have none – it will be more difficult that my Greenfield trial. Yet, a win here could do wonders for activists in the “Shire” attempting to change coercive government actions.

That being said, I also know, and appreciate, the offensive tactic as well and when done properly, is mightier than the current justice system. In terms of risk, I end up taking more with this tactic, as these actions will be done outside the court room. The best part of this strategy is that the actions the government is trying to distract you from – excessive force, deletion of evidence and criminalization of those who question government – will be front and center. As this issue goes further back than just one phone call, the Manchester police have gotten away with murder (literally) for a while now.

Regardless of how this fund raiser goes, I’ll be in court, speaking the truth and defending my position on filming, recording and monitoring public officials. I would greatly appreciate you donating to either cause as it would help me (and other activists) further the message of police accountability. You can also buy CopBlock.org swag, which help funds our CopBlock activities, or contact me for video intro/outro’s and power post. For those unable to donate, sharing CopBlock.org content and social networks is just as good as FRN’s and I need/appreciate your support as well.