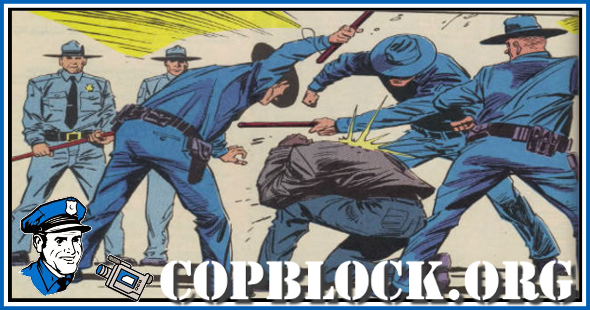 [The following article was sent to me via Jeff Berwick, Chief Editor of The Dollar Vigilante, and was originally posted there]

I am going to make this as short and simple as possible because I know 99% of people are too busy to put much thought into solutions.

However, if you read this, you will have an answer that will rid the world of police brutality forever and it can start tomorrow. In one town, as you’ll learn below, it’s already started.

Question: How long has police brutality been around?

Answer: Ever since there was police.

But, have you ever noticed when you have a problem and you keep trying to fix it and it never works… then, what you realize, was that you had the wrong concept?  As a simple example, when you try to remove the lid off a jar of pickels and you try and try but just can’t?  Then, finally, you realize you were trying to turn it the wrong way!  Once you understood how it worked, the solution was easy.

It’s the same with the police brutality question.  You keep trying to fix it and fix it but never can.  Why? Because you’ve got the wrong concept.

You may laugh or even feel rage at what I just said.  That’s because you’ve been programmed through government schools and television programming to think there is no other way.

Read just a few paragraphs further and you will totally get it.  I will show you that you are turning the pickle jar lid the wrong way in the next few seconds.

Question: What do most people think police are for?

Answer: For protecting the public.

That is not what they are for.  They are there to protect the system which enslaves you and us all.  The people of Baltimore, and everywhere in the world, should be able to see that clearly after all these centuries.

So, what’s the answer?  It’s simple.  So simple you probably can’t believe you didn’t think of it: Privatize the police.

What happens when you privatize the police?  You get better service.  Way better service.  What you are getting with public police isn’t even “service” anyway, it is oppression, as most in Baltimore can see daily.

What you want is security.  How do you get security?

1. Protect yourself.  Of course, with all the anti-gun legislation that is difficult.  But, without “police” those laws would disappear and you could protect yourself.  That’s exactly what happened in Ferguson and Baltimore as some armed citizens actually protected their own property.  As well, technology is bringing solutions.  There is an app called the Peacekeeper app (Google Play/iTunes) where communities can protect themselves.  If you have a problem, just hit a button on the app and your entire community will know about the problem and many will come to your aid.

2. If you don’t want to or can’t protect yourself then hire a security firm.  They certainly couldn’t be worse than the “police” who mostly badger people.  If you were paying a security firm, at say $20/month, they would offer the best service to make sure you always had the best protection.  And if they didn’t, a competing firm would pop up and offer you better service for the same price or the same service for cheaper.

Don’t think it’s possible?  In Detroit, due to the fact that the city was so broke they could barely keep up a police force, luckily, private security firms became popular.  If you want to see the difference between a private security firm and the public police, just watch this short video and your eyes will open to the potential and how much better life would be if police were privatized.

That private security firm has been in business for 20 years and has the goal of always reaching the most “non-violent outcome possible”.  In those 20 years none of their clients, none of their security team nor even any of the criminals have been hurt.

And, before you say, “what about people who can’t defend themselves or pay a security firm?”.  That Detroit private security firm makes such good profits from its corporate and private clients that it offers its services to free for those who can’t afford it.

It is really this simple.  Just privatize the police.

HOW TO PRIVATIZE THE POLICE

This is the harder part, but definitely not impossible.

All you have to do is spread this information widely.  Share this article, share the video above.  Once enough people understand that the simple, easiest and best solution is to privatize the police then there will be enough momentum to start privatizing police forces around the US and around the world.

The key is understanding that the system as it currently is was never designed to protect the people and can never be fixed.  How many more decades do you want to go through this?

Start locally in your communities and spread this information.  And, that is all it is, information.

Just like the key to opening the pickle jar was just a misunderstanding in your own mind of the way it worked and once you understood how it worked it was easy… this is the same.

You don’t need to burn cars and beg or yell at politicians to try to change things… that never works.