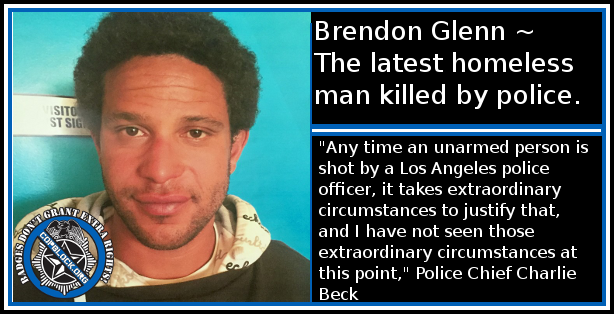 Brendon Glenn is the most recent unarmed black man to be shot dead by the police. A peace loving and well liked homeless black man, Glenn was doing his thing in Venice California near the boardwalk when someone decided to call the police on him for panhandling. When the police came and started bullying him, he resisted so they blasted him.

The Los Angeles police have not released the video of the incident yet, but police Chief Charlie Beck, who has seen the video told reporters that he has not seen the extraordinary circumstances that would justify the use of deadly force against an unarmed man. What is extraordinary about this particular shooting is that the officer was also black. Although it is not unheard of for black police to kill unarmed black men, it does raise eyebrows when it happens. Whenever a white cop kills an unarmed black man, racism as a motive always comes up. The racism card can’t be played in this case, though you know it would be if the officer was white. What it comes down to is that corruption knows no racial boundaries. Black, white, yellow, and brown officers have killed unjustly.

In the case of Brendon Glenn, the officers had not been issued body cams, so the one that pulled the trigger may have thought that he could to get away with it. The only known video came from a security camera on a nearby building. According to those who have seen the video, the killer cop was a few feet away from Glenn when he pulled the trigger; and at that moment there was no apparent threat. The struggle was brief and the officer stepped back and ended the life of a fellow brother. There has not been a single witness, or person familiar with the case say that this officer’s action was justified. If black cops are going to place such little value on the lives of other black men, how can they expect white officers to be any different?

As citizens of this great nation, we can no longer afford to be apathetic towards police violence. We can no longer give the police a free pass to just kill whomever and whenever they want. We are quickly turning into a police state and the only thing that can save us is action. Victimsofpolice.com has been working hard to thoroughly document every case where someone dies at the hands pf police, including not just the victims’ names, but also all available information about the officers involved. Whether it is video taping the police, writing letters to politicians, or contributing to causes such as victimsofpolice.com, everyone needs to do something before it is too late. Cops don’t just kill bad guys anymore, they are killing everyone!

MEDIA STORY ABOUT THE EVENT