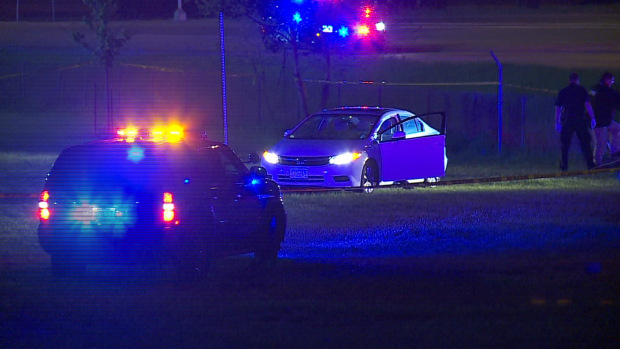 On Friday night an Lino Lakes Police officer pulled over a vehicle on 694 in Fridley, Minnesota. Police report that the driver attempted to flee the scene, dragging the officer who then fired and killed the driver. Neither the officers or deceased names have been released and according to CBS Minnesota:

Fridley’s director of public safety says the shooting happened during a traffic stop on Interstate 694 in Fridley just before 11 p.m.

A Lino Lakes Police officer, part of a multi-agency traffic enforcement detail in that area, pulled a driver over in Fridley.

The driver tried to drive off during the traffic stop, but ended up dragging the officer with the vehicle for some distance on the freeway. Officials say the officer pulled his weapon to stop the driver.

“In an attempt to get away from the vehicle, the officer discharged his weapon and a male individual is deceased,” Don Abbott, director of public safety for the City of Fridley, said.

It is unknown why the driver felt the need to flee the scene. Yet, with such stories as Walter Scott, who was shot by Michael Slager after (presumably) fleeing a traffic stop due to fear of being taken to jail, I can’t help but wonder why this person choose to flee. Did they also fear being taken to jail over some victimless crime? Was the officer attempting to violate their rights? Or maybe the person was really wanted for a violent crime with victims?

We don’t know but we do know that they system keeps producing stories where minor traffic stops lead to death. We have to start asking ourselves why this happens. Walter Scott probably ran because of child support but he was pulled over for a broken tail light. Are either of those “crimes” worth his life? Whatever the reason that comes to light over why this person ran, was it worth their life?

I’ll add updates as more information surfaces or you can submit and update as well.