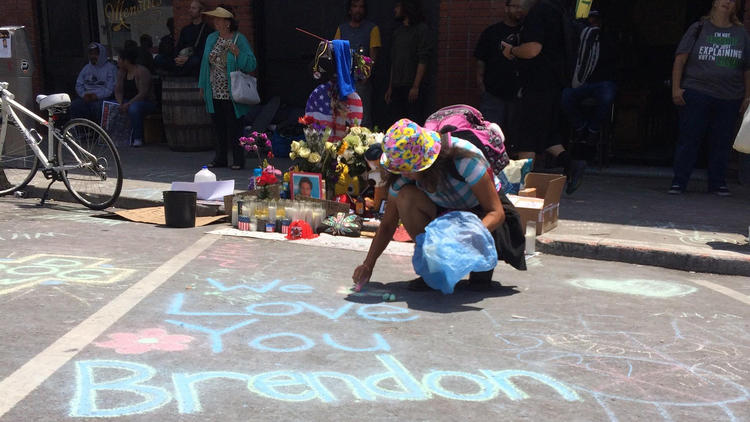 Los Angeles, CA – Brendon Glenn, a very well known and well liked man in the Venice Beach area, is now dead after an encounter with LAPD officers on Cinde De Mayo. Brendon was described by friends as a “peace maker” who “talked about peace and love all the time” Known as ‘Drizzle’ to his friends, he had fallen on hard times and was homeless, something his family didn’t even know. Despite setbacks, Glenn was in a youth program and seeking help, trying to turn his life around. LAPD reports that officers had talked to Glenn after he was seen “harassing customers” in the area. At this point, Glenn began walking towards the Venice boardwalk, and the officers went back to their patrol car. Shortly after, it is reported that Glenn was involved in a “physical altercation” with a bouncer, cops moved in to detain Glenn. Video exists of what happened between the officers and Glenn but it has not been made public. Sources who have seen the tape say that two officers were able to successfully subdue Glenn and bring him to the ground. Then, for no apparent reason, one of the officers gets up and steps back and shoots Glenn. The video, as well as the names of the officers involved in the shooting, are being withheld.

Glenn was unarmed. Even the Chief of Police, Charlie Beck, upon seeing the video, conceded that there does not seem to be a good reason as to why officers shot this man. As shown in a CNN Video Report, Beck is quoted as saying: “Any time an unarmed person is shot by a Los Angeles police officer, it takes extraordinary circumstances to justify that, and I have not seen those extraordinary circumstances at this point”

Police unions were quick to jump on Beck for “rendering a judgement” and “influencing the investigation” simply because he called it how he saw it, an unprecedented public move by an LAPD Chief of Police, according to long time activists.

Despite all the mystique surrounding the case, the death was ruled “justifiable”, after LAPD had promised in a press conference to have a fair, open, and transparent investigation into the case. About 400 people showed up to a press conference, many of whom were angry and skeptical of the police. Nearly everybody agrees that the video of the incident needs to be released. LAPD claim they are withholding the video so as not to “taint” the witnesses. How an objective view of the events through a camera lens can be considered a “taint” is anybodies guess
Courtesy of KTLA News