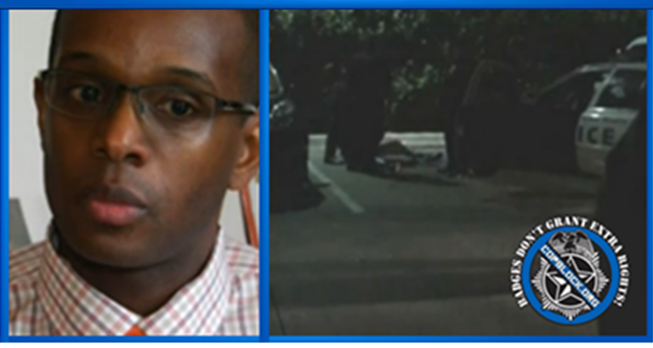 A Santa Monica, CA man arrested by city police while attempting to charge his electric car has filed an excessive force lawsuit alleging he was tackled and pepper-sprayed after refusing to show his ID.

Video recorded by a concerned bystander shows the tail end of the April 21 interaction in which 36-year-old father of four, Justin Palmer, can be heard yelling at Santa Monica police who have him handcuffed on the ground at a Virginia Avenue Park charging station.

Palmer says he’d gone to the park just before 11 p.m. to charge his electric vehicle because he’s not allowed to charge at his apartment complex a few blocks away.

He says police approached him and told him to leave, claiming the park was closed, but the police report shows his arrest was made at 10:56 p.m. The park closes at 11:00 p.m.

Palmer does admit to refusing to show is ID but asserts the officers had no right to interrogate him.

“I couldn’t believe that this happened over me just trying to plug in my car,” Palmer said. “I didn’t know what was going on, I just felt he was singling me out and asked for my ID.”

Palmer says after officers asked for his ID he demanded to know why they were approaching him, since other people were also in the park. He said one officer then threw him to the ground causing him to hit his head on the concrete which resulted in a concussion.

“He swept my legs and held my arm and threw me to the ground,” Palmer said. “I hit my head on the ground and blacked out.”

Palmer says police then pepper-sprayed and arrested him. He spent the night in jail but was released the next morning without charges.

“That’s how obvious it was my client didn’t do anything wrong,” Palmer’s lawyer Justin Sanders said.