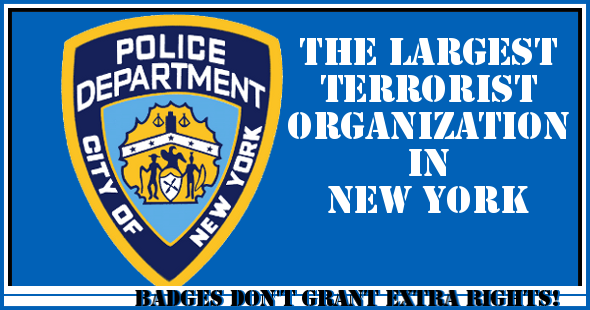 Wanting to make a statement about the police force that he thought would be uncommon, Russ Wishtart custom made this t-shirt and wore it around town in New York City. The reactions he received were completely unexpected:

I made that t-shirt and wore it for the first time on Friday.  I was fully prepared for people to engage me with negative comments.

I was completely unprepared for what actually happened. Most of this happened on the subway.  I took a ride (about 20 miles round trip) into Brooklyn to meet up with a friend to play snooker.  When I ride the subway, I have my headphones on and I wear a baseball hat.  I don’t make eye contact with strangers.  I rarely get approached for conversation on the subway, except sometimes by tourists who are lost and need directions.

I was approached about 15 times on the subway, plus another three or four times on the street.  I regret not keeping a log so that I would have an exact number.

Keep in mind that every time someone wanted to talk to me about the shirt they would actually have to tap me on the shoulder or gesture at me because I had my headphones on. That’s a higher bar than the typical “excuse me” or “hey man” to begin a conversation.

Every single interaction was a positive one.

People stopped me and asked various questions and made comments.  One question that came up several times was, “Hey, where did you get that shirt?  I want to buy one.”  I wish I could have told them where to buy one, but like I said I made the shirt myself.

One type of comment took the form of “hey man, that’s a great shirt” followed by them telling me a story about how they were harassed/arrested/roughed up by the NYPD.

I had to take two trains to get to the snooker club, so I was standing on two separate subway platforms waiting for the J and the N.  On two occasions, I saw someone from across the platform waving at me.  I took my headphones out to hear them say “great shirt!” and “awesome shirt man!”  These were the only times that anyone has made contact with me from across a subway platform (about 30 feet away).

One guy was banging on the window on the M when it stopped at Essex St..  He gave me a big thumbs up.

One person told me that he loves the shirt, but that I’ve got balls for wearing it.  I asked him what he meant by that.  He explained that I may be putting myself in danger because the NYPD may harass or harm me if they see it.  I think he may be right, and I think that says it all, really.  1st Amendment protected speech being responded to with violence by law enforcement shouldn’t be a concern. That did not happen (I didn’t see any cops on my trip), and I hope it won’t. That said, I think he may be right that it may be a legitimate concern.  It should be unthinkable.

The people who talked to me were from all races and colors. (All were men except for one woman.)  I was first approached by a white man, mid 40’s, who had three young children with him.  My first thought when I saw him approaching me was, “here we go…just be polite to him and don’t argue.”  He was the first of many who asked me where he could buy the shirt for himself.

I didn’t make this shirt for the sake of being controversial. Clearly, the reactions were just the opposite.  This is not a controversial opinion. This is the mainstream opinion.

Many people have an idea of a terrorist as being someone who uses violence towards the goal of hurting or killing people.

That’s not all that terrorists do.  They seek to cause damage in many forms.  Many times their goal is to cause economic destruction.  Sometimes they imprison people who have harmed no one because of political views or other reasons.  The constant threat of living amongst terrorists causes fear and emotional distress.  Terrorists are not afraid of breaking the law to accomplish their goals, and they do so regularly.  Terrorists don’t have a problem lying in court while under oath.  How do you feel when you are driving at or below the speed limit and you see a NYPD car in your rear view window?  Exactly.

The NYPD has committed all of these offenses and many more.  They have killed nonviolent citizens.  They have thrown innocent people (many of them photographers) in jail on trumped up charges.  They extract revenue from people who have committed no act of force against any other person – in fact, the NYPD has done that over 100 times since you began reading this.

So when I say that the NYPD is the largest terrorist organization in NYC, I am making a true statement based on facts.

Does the NYPD help people?  Yes, every day.

Does the NYPD hurt innocent people?  Yes, every day.

Not all cops are bad. I think most cops are good people – NYPD officers included.

That doesn’t change the fact that the NYPD has more employees who are engaging in activity that would be accurately described as terrorism than any other organization in the City of New York.

The fact that my simple statement printed on a t-shirt provoked such an overwhelmingly positive reaction is actually very sad.

My experience is not a scientifically controlled poll.  But I think it is very telling.  The citizens of New York City are fed up with the NYPD.

We are tired of the harassment, the petty tickets with exorbitant fines, the oppressive broken window policing.

We are tired of reckless behavior and blatant disregard for the law by those who we pay to enforce it.

We are tired of the corruption and the quotas.

We are tired of being disrespected.

We are tired of the NYPD union protecting violent felons.

We are tired of civilians being murdered by the NYPD.

WE WANT TO BE LEFT ALONE.

I wish I had printed more than one shirt.  I’d like to wear it every day.

This guy did something brave by making this t-shirt and wearing it around town expecting there to be opposition that he would have to deal with. Little did he know that he would discover a whole community that agreed with him. If this story teaches us anything, it is to speak up when you see corruption and encourage others to do the same. You just never know how many other people in your community might feel the exact same way.