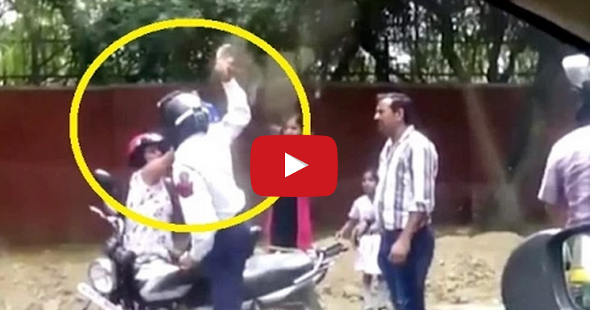 So you don’t like police brutality huh? Good thing you live in America and not a third world country like India or something right? – Where police run amok with impunity blackmailing, beating and extorting citizens for simply not doing what they say?

But whats the difference? A recent incident in India quantifies the fact that there is none, perfectly.

An officer in Delhi was arrested this week after he was caught on camera launching a brick at a woman after she refused to be extorted for 200 rupees – about $3.

The woman had been taking her two daughters to school when, after allegedly running a red-light, officer Satish Chand, told her that she would need to give him money for the minor infraction on the spot.

After the woman refused to pay and asked for a penalty notice that she could pay later instead, Chand refused and kicked her scooter, witnesses say.

After Chand continued to demand payment, the woman retaliated by throwing a brick at the traffic cop’s motorcycle saying, “You broke my bike, I will break yours,” witnesses say.

Video recorded by a bystander shows the officer then pick up another brick and hurl it at her, striking her on the arm. The woman is then seen on the footage desperately trying to stop Chand from throwing another brick at her.

“My wife said she had a license, registration and was wearing a helmet so she would not pay, the woman’s husband said. “She said she was in a hurry as her children were with her, and asked him to send a notice and she would pay the fine.”

The woman received hospital treatment for injuries on her arms and back.

So, how is this third world police extortion scheme any different than what we have in the west? Short answer: It isn’t.

Don’t think so? Just go run a red light, dive five miles over the speed limit, or engage in one of the millions of other victimless “crimes” that men in suits (politicians) wrote down on pieces of paper (laws) saying you owe them money for.

Sure in the U.S. the enforcers of the regime may be a little more tactful about robbing you but what happens when you refuse to pay?

Well, its not likely officers will come throw bricks at you, but instead, they will come attempt to kidnap you, throw you in a cage, and in all likely hood if you resist or attempt to defend yourself in the face of their extortion, beat or kill you.

Ah, the first world – its good to be civilized.

Delhi Police Chief BS Bassi called Officer Chand’s actions “shameful,” saying that “strict action” will be taken against him. Chand has now been fired and a criminal case has been launched against him.