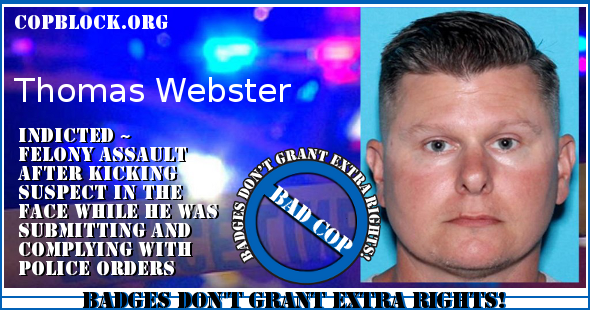 Dover, Delaware – Cpl. Thomas Webster of the Dover police department has been indicted by a grand jury for felony assault after a video went viral of him kicking suspect Lateef Dickerson in the face while he was submitting and complying with police orders. The video shows Lateef putting up no struggle, and getting on his hands and knees as he was listening to police orders to get on the ground. Cpl. Webster then delivers a brutal, unprovoked kick to the face that knocks Lateef unconscious immediately and broke his jaw. Lateef was alleged to have been involved in a fight, but no injuries or other party that he could have been in a fight with appear on the tape.

While it is a small victory to hear that an officer was actually indicted after a string of officers getting off without indictment like in the Michael Brown and Eric Garner cases, it is still disturbing just how long and what kind of hurdles had to be overcome to get to this point. And as we are quickly learning in the case of Freddie Gray, an indictment or charges are not necessarily an indication that justice will be served or accountability achieved.

This case started in 2013, when Webster was originally placed on paid leave pending an investigation. In 2014, A grand jury on behalf of the U.S Attorney’s office refused to indict him, despite the clear-as-day evidence in the video that he was not resisting and was of absolutely no threat to either of the officers on the scene. They actually said that kicking a compliant man in the face, shattering his jaw is no human rights violation! It wasn’t until the ACLU sued the Dover Police Department, and the case was picked up by the Delaware Attorney General’s office that real justice was set in motion, 2 years after the actual event. Defense attorney’s are outraged that charges continued to be filed and that the video has been made public.

Let’s hope that this time, a police officer can be held to the same standards as the rest of us, thanks probably only to the preservation of the video account.

Watch The Video Below