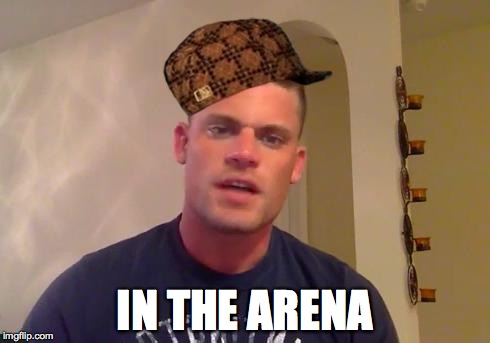 Welcome to a new project that I am calling Copsuckers’ Corner. Every once in awhile there is a police supporter who is so cartoonishly ridiculous that they just WTF your gosh dipped mind. A caricature so cliche that they become a surreal cultural artifact which illustrates succinctly the stupidity of dogmatic faith in law enforcement. A study in hyperbole…

John Burk, aka: Soldier of Steel, describes himself as a ‘fitness motivator‘. I am not sure what that means, although I suspect it involves spending some time at the gym and always having to find new friends. Recently Mr. Burk began making YouTube videos to share his thoughts and ideas because- fuck you! Now drop and give me fifty Patriot-ups!

I dunno, man. I didn’t do it. I have no idea how, out of the infinite amount of things that people can be, some of them become this guy. Some people are hard to blame because you know they would not be them if they could choose. The scariest thing about this guy is that he would. Given the opportunity he would multiply his himness until it encompassed all of reality and make that reality do squats until it cried, while he called it fat and charged it $40.00 an hour.

As you would expect, no rational arguments are made in the video. There are no facts presented, nor are there even any examples given. It is, intellectually, ten miles on a broken treadmill to nowhere. It is an empty mental dumbbell, too thin to support any logical weight. However, what it is lacking in reason or critical thought, it more than makes up for with logical fallacies of almost every type. It is also chock-full of grammatical daring, linguistic ingenuity and pulled together by woefully playful dynamics. IE: It sounds dumb as fuck. The bad-acting, emotional posturing and constant stuttering are painful. It is like getting yelled at after school by a helmet-wary lineman from your 11th grade US Government class.

However, I decided to transcribe the video. When you read it, it is pretty fucking hilarious. I read it several times using the voices of different cartoons and historical figures and just about freed a poo-prisoner laughing at the zaniness of it. I suggest you start with Yosemite Sam and go from there.

“Look, you people that want to insult the police officers, you’re the ones that are the fucking problem. I don’t know what you think that…that…warrants you to sit there and criticize them for the job that they do. I understand that a few bad apples are out there. Yes, there are crooked cops. But yes, there are crooked politicians. There’s crooked soldiers. There’s crooked anything that you put out there thats public service, they’re gonna have crooked people. But it doesn’t define them as a whole. Many of you preach don’t stereotype certain cultures, religion…this that and the other. But suddenly it’s fuckin’ alright to stereotype the police force. ‘Oh, now they’re all corrupt.’ No the fuck they’re not. And the thing that I love about it is, and you wanna talk about being in the arena, i can’t even watch sports shows, cause those stupid ass little fuckin’ commentators sit up there in their little comfy booths and their thousand dollars suits, and they sit there and they nitpick how the players are on the field. ‘Well, you know, I would of done this if I…’ Motherfucker, you’re not on the field. You wouldn’t know what you would do. I hear the same thing about soldiers in combat. ‘You know, when I get to combat I’m going to…’ Dude, you don’t know what your gonna do until that first round snaps by your head. So, to you people that want to sit there and criticize the police force, here’s a challenge for you. Step the fuck up, go to the academy, and become one. And then make a change in the world. And Represent the police force in a better manner than you think it already can’t be done. You think they’re all fucked up. But who are the first ones you are gonna call when shit hits the fan. I guaran-fuckin-tee it will be them. You’re not out there walking the street every day literally dealing with the scum of the earth. Not knowing if you’re gonna make it back home at night or not. I did four and a half years in combat. Okay. Thats just four and a half years. These people do it for 20…30…40 years. Nonstop, all day, every day. Just constantly dealing with every little shit head out there that wants to try and violate the law. And then suddenly act innocent like they didn’t do anything wrong. Thats what I fucking love. You broke the law and you get busted for it and suddenly the cops are bad. W-w-what kind of fuckin’ common sense is that? Obey the law. Quit being a shithead. And everything will be alright. With that being said, I understand, there are bad police officers out there. I am in full favor of the body cams. I love that idea because it protects both parties. Now there will be no more finger pointing, he said, she said. Everything is documented, everything is on the up and up and it should be fair. But this bullshit has gotta fuckin’ stop. Teaching our youth not to trust the cops? Good grief. You’re the fucking whats wrong with America. Seriously. It just…I…no, I love…I have so much respect for the police. The boys in blue take care of the people at home. The firefighters, the EMT, the police force don’t get nearly enough credit. And here is something that really fuckin’…I love this, alright.

911 happens. 911 kicks off and suddenly they’re this nations heroes. You’re postin’ firefightin’ fuckin videos. You’re postin’ firefighter badges in their uniforms. And the police force. Suddenly something goes wrong and now its ‘fuck all the cops’. How dare you! You’re what they call one of those sunshine patriots. When things are going right, you’re in full favor, but when something slightly goes wrong, and it kinda rubs you the wrong way, ‘fuck everybody’ and ‘fuck the cops’. That, thats sad man. So, any police officers out there- man, I got your back a hundred and ten percent. As long as you do the right thing. And the same applies for soldiers. And the Military. I got yer six no matter what. Cause I know what its like going through out there. I know what it’s like to strap on body armor, and go out and deal with people that you know are going to try and kill you, and don’t like you. I know what thats like and I feel for you, I Really do. God bless you for what you do. I couldn’t do it. I really couldn’t. Right now it is a hard time to be a police officer. Everybody is looking down their nose at you guys. Stay positive and stay focused, man. Don’t let this nations twisted ass view of how ya’all operate demotivate you, and you know, get you down. I know it won’t. You guys and gals are stronger than that. You’re tough sons of a bitches and I respect the fuck out of you for it. Cause I couldn’t do it, man, I really couldn’t. I love you. I love you all. You guys and gals. You all are…fuck…I have the utmost respect for you all. Just stay in the arena. Stay fighting. And don’t let these people get to you. It ain’t worth it, man. It ain’t worth it at all. In the arena.”

In the arena, motherfuckers! Get it? GET IT?

As I said before, duderino here is a ‘Fitness Motivator’ which is at least five silly gym outfits and a dozen high school auditoriums away from being a Motivational Speaker. His inclusion of his John Burk: Soldier of Steel brand motto, ‘In the Arena’, as well as all of the impossible hyperbole and bad acting is a pretty big clue that this guy is full of shit. As awareness of the police state grows, so too grows the volume and number of voices that criticize it. His video is a careful marketing scheme to fill a dwindling niche in the cardboard patriotism demographic. He is using peoples misguided and highly conditioned beliefs to to sell them the John Burk brand, while disguising it as patriotism. I also do not doubt that the guy is a cliche of manufactured nationalist pride and jingoism, nor that there is not an element of what he actually believes in the video, but for the most part it is a calculated attempt to finagle fame and fortune by targeting the ‘Murrica!‘ demographic. He is true patriot, one who flies the flag like a hijacker holds a baby hostage in front of themselves to avoid getting shot at, except the only danger here is failure. Failure to sell you something; that something being John Burk: Soldier of Steel and Universal Motivator.