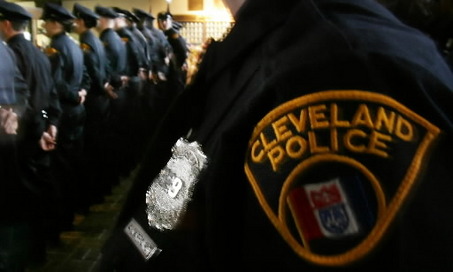 Nine of the thirteen officers involved in the murder of Timothy Russell and Malissa Williams have filed a discrimination lawsuit last year against the city of Cleveland. They have inadvertently caused an additional problem for the Cleveland police, because a judge has ruled that Cleveland must open the books on police involved shootings from 2007-2012. They will have to show how many police involved shootings there were in that period and the discipline handed out. Some of the 13 include officers that refused to testify against Micheal Brelo at his trial that is currently ongoing. Cleveland Scene reports:

…as tone-deaf as the lawsuit is — it was filed just days after Cleveland police officer Timothy Loehmann shot and killed Tamir Rice and just before the Department of Justice released a summary of their damning investigation into the department — even more information showing the inner workings of how the Cleveland Police Department reacts following police-involved shootings will be included in the court file (these records are already public record, technically, but it takes months and months for a reporter to get records on even a single shooting).

Lawyers for the officers initially asked for the city to release 13 years of police shooting records — including the ethnicity of the police officer who shot and their discipline and/or reassignment records following that. The lawyers are trying to find correlation between the race of the officers who shoot black people and what happens to them afterwards to prove that these “non-African American” officers were treated slightly worse when they shot black people.

A federal judge initially ruled last month that the department must provide shooting records (including the race of the officer) and disciplinary records for police shootings that resulted in death for the past five years. But after a motion filed by the officers’ lawyer, a judge ruled that last week that records of police shootings that didn’t result in death will be included, too.

So now Cleveland has to open the books. What does this mean for an already torn city? The protests around Cleveland have been tame by the standards set by Ferguson and Baltimore, so time will tell. In Beaver Creek Ohio, the protests have been peaceful and, in my opinion Beaver Creek has more of a right (for lack of a better word) to riot than any other city, because John Crawford was murdered for the routine act, or crime, according to Beaver Creek police, of shopping in Wal-Mart! They should be up in arms! Not that I condone rioting, but I would understand it coming from a place where someone was murdered for shopping, as opposed to the rioting happening because of circumstances surrounding events in other cities.

This lawsuit was filed in between the Tanisha Anderson, and Tamir Rice’s murders, and just before the Department of Justice Report. These are some unintended consequences, but should serve as a wake up call to the people living in and around Cleveland that praise the Cleveland police, despite the overwhelming evidence to the contrary that Cleveland police are not held accountable for killing people. We have no less than four out of the six high profile Ohio cases involving police shootings, here in Cleveland. The more Ademo and I travel around Ohio, we see the facade fall from police departments all over Ohio. Most recently in Lima and Zanesville Ohio, where police lie in court and get away with it, even after its proven they lied, and where they delete video evidence after arresting people for filming them. Instead we live in denial! Time to stop the copsuckin’ Ohio!