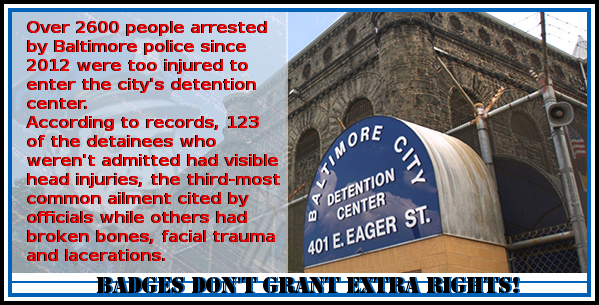 Over 2600 people arrested by Baltimore police since 2012 were too injured to enter the city’s detention center, jail records show.

The Baltimore Sun reports that according to records, 123 of the detainees who weren’t admitted had visible head injuries, the third-most common ailment cited by officials while others had broken bones, facial trauma and lacerations.

While the records do not indicate how the people were injured or whether they suffered their injuries at the hands of police, they do suggest that officers either ignored or did not notice the injuries.

The report comes in the wake of the death of Freddie Gray last month, who died of a broken neck prosecutors say he suffered while riding in the back of a Baltimore police van. Six of the officers involved are facing criminal charges, including one charged with second-degree murder.

The incident sparked protests and rioting in the city, before Friday, when the U.S. Justice Department launched a civil-rights investigation into the department.

Critics say the figures show that Baltimore police officers take little interest in detainees after they are arrested. This may result, law enforcement experts say, from officers not receiving adequate training to detect injuries or whether or not a detainee is faking being hurt in order to avoid jail.

The United States Constitution guarantees health care to suspects before they are booked into jail. In the Gray case, prosecutors say the man requested medical care five times before his death.

The Sun previously reported that dozens of Baltimore residents have accused the city’s police of inflicting injuries on them and disregarding their requests for medical help. The city has paid out almost $6 million in court judgments and settlements in response to over 100 lawsuits filed since 2011.

Baltimore officials have not yet commented on the report.