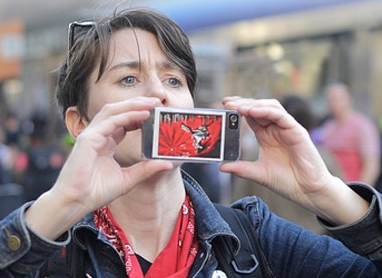 All police – whether in the USSA or North Korea – operate according to the same misguided idea: that it’s acceptable to steal from people in order to protect them. In other words, police claim a “legal” right to initiate force. It’s not surprising, then, that when you see a police employee in your rear view mirror or clumped with his comrades on the sidewalk, you become anxious.

Fortunately, there are a couple of things you can do today to dramatically better your chances of remaining unscathed by these career criminals.

#1 Be mentally present. Police are trained to get what they want via bullying, lying, and purposely misleading others. They are incentivized to cage peaceful people and to steal their property, claiming “I’m just doing my job” (which is perhaps less a justification than a way to ease their afflicted conscience).

Rather than get roped up with such thuggery, be cognizant. Don’t play their game, question their game.

Your goal, especially when confronted by a police employee (as opposed to approaching a police employee on your own terms to question their harassment of someone else), is to de-escalate. To limit the duration and negative impact. The sooner you can exit the situation, the better.

Realize before an interaction even occurs that police are used to people deferring to them. Why perpetuate such an arrangement? (For more on this angle, check out the video Want to End Police Brutality?)

If a stranger on the street approaches you and starts to aggressively question you, are you obligated to respond? Apply that same paradigm to these strangers wearing costumes and badges. After all, police are just people. Don’t let their costume intimidate you.

Instead of immediately responding to the question posed, pause. Take a breath. Give yourself time to think. Change the flow of the exchange. Answer their question with a question of your own.

It’s best to start with something like: “Am I being detained?” If you’re not given a resolute “Yes,” be on your way.

Often, police employees are purposefully vague. They may mutter something like, “I just need to get some information…” or, “I’m asking you questions now.” Such stalling tactics are a sure giveaway that they in fact have no ability, per the rules they claim to enforce, to delay your freedom of movement.

If you are told that “No”, that you aren’t free to go, then either continue to ask questions like “Where is the victim?” or “What would it be called if I acted as you are now?”, or state “I don’t talk to police” and remain quiet. Certainly don’t state anything incriminating.

The tactics explained above are especially effective when coupled with the next tip.

#2 If you have a smartphone, always use a streaming app like Bambuser if a police interaction is possible. Your ability to record and share, in real time, can prove a big deterrent for unjust behavior.

When going out for a walk or when getting in your vehicle, proactively load your streaming app. Make it part of your routine. That way, if you are confronted by a police employee, you’re ready to stream at a moment’s notice. You may even want to get into the practice of titling the stream ahead of time with the date and location. Then if you are stopped, those in your network can respond accordingly.

Some police employees, upon seeing that they’re being recorded, become reactionary and escalate the situation. They demand that you turn off your device. They may even try to grab it, and in the process, claim that you are “resisting” or that you “assaulted an officer.” Therefore, if a police employee starts to make their way to you, let them know you are streaming.

By vocalizing the fact that the exchange is being streamed to an offsite location, the police employee is put on notice. Even if they take and destroy your phone, a transparent record of their actions is inaccessible to them. And it may even deter a police employee who was about to engage in a fishing expedition.

Another reason to inform the police employee(s) that you are streaming is to mitigate any legaland threat of “wiretapping.” Videotaping someone in public (such as a police employee) is not illegal anywhere within the USSA (though of course that may not stop someone with a badge from claiming it is). Yet recording audio, in some places, is said to be illegal unless all parties are aware the recording is happening. Thus, err on the side of protecting yourself by disclosing that you’re streaming.

Just imagine if everyone today who was stopped by a police employee used these two tips – being mentally present and streaming the interaction. Without question, much frivolous and unjust police activity would be curtailed.

While that would be great to see and is a worthwhile goal, realize that the only thing you can control are your own actions. As you work to safeguard yourself from police violence, you will embolden others to take similar steps.