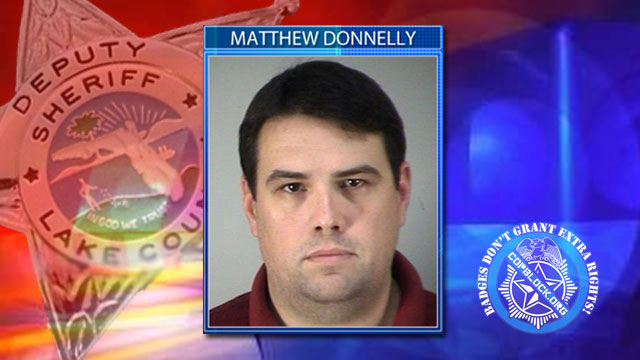 A woman testified in court on Tuesday that Matthew Vernon Donnelly, a Lake County Deputy Sheriff, raped her Jan 1, 2014.  Donnelly was arrested the same month and charged with sexual battery by a law-enforcement officer.

After a night of drinking on New Years Eve, the woman’s boyfriend flagged the deputy down because she was unresponsive.  This was recorded by Donnelly’s dash cam.

According to the prosecutor, the woman woke up with Donnelly next to her SUV.  The boyfriend was in the back of the police cruiser.  The deputy sheriff threatened to arrest the boyfriend if she didn’t cooperate and sexually assaulted the woman with his hands through the window.

I was begging him not to take Daniel to jail. He said he wouldn’t if I just didn’t tell anybody.

I just woke up to a cop being at my window.

She said Donnelly demanded to see her breasts and told her she was “fucking sexy”.

The woman suffered a cervical injury and an investigation by the Florida Department of Law Enforcement (FDLE) supports the woman’s complaint by finding three locations in Donnelly’s patrol car with her DNA: the steering wheel, the gear-shifter, and Donnelly’s flashlight.

The FDLE also determined the deputies dash cam was turned off for 22 minutes during the stop.

The trial is expected to wrap up this week.