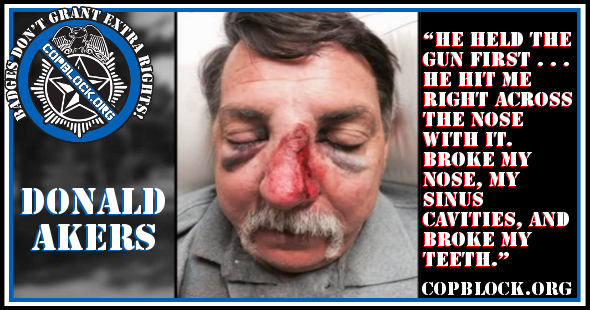 ST. LOUIS COUNTY, MO – Janet and Donald Akers were on their way to Jefferson Barracks to visit Janet’s mother’s grave on Mother’s Day.

“I wanted to go there and put some flowers on my mother’s grave . . . but I didn’t make it.” Janet stated after the incident.

As soon as they exited I-255 at Telegraph Road, the driver (Janet) honked the horn at a black dodge truck that appeared to be coming into their lane and almost hitting them. After she honked at the truck, the driver of the truck then got behind her and started tailgating her, honking his horn all the way through the intersection. After he kept following her, Janet Akers gestured to the driver of the truck to pull over to the parking lot, so she could explain to him why she had honked at him in the first place.

“His wife came out of the truck and she came over and started yelling at me.”

Akers then said the driver got out of the truck and approached their car holding a gun.

“I didn’t know if he was going to shoot us or what.” Donald Akers stated.

The driver of the truck then started to attack Donald, the passenger of the vehicle.

“He held the gun first . . . he hit me right across the nose with it. Broke my nose, my sinus cavities, broke my teeth.” Donald Akers continued.

After seeing her husband being attacked, Janet decided to fight back and the fight was broken up by bystanders shortly after.

“So the police came and then went directly over to them, and was talking to them, laughing, joking around . . . we feel like they knew them right off the bat.” said Janet Akers.

It turns out, the man threatening them was an off-duty police officer.

The Akers say that Donald was not offered medical treatment right away and that only their car was searched after the police had arrived.

Donald Akers, who was bruised up, said,

Unfortunately for the Akers, they did not receive the special treatment that comes with having a badge. If they had done this to someone else, they would surely be in jail right now. This will likely be a Mother’s Day that the Akers family will never forget.