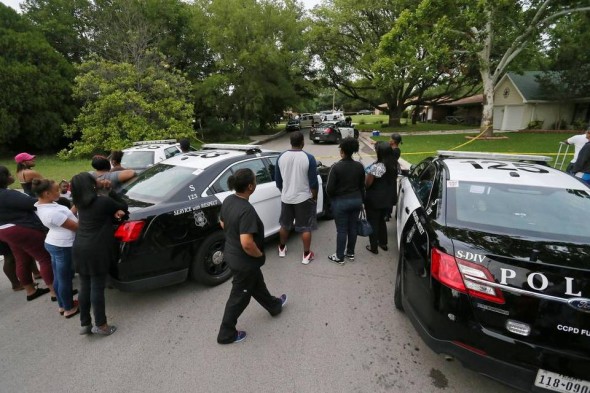 Two Fort Worth, Texas police officers were watching an alleged drug house when they had reason to believe Kelvin Goldston, a wanted felon, was at the address. When Kelvin went to leave in his silver Chevrolet Silverado pickup the two officers went to apprehend him. According to the Star-Telegram:

The officer approaching from the front was a uniformed officer. The narcotics officer in plainclothes approached from the rear.

The officer approaching from the front started shooting, hitting the driver a number of times, Enright said.

Goldston was pronounced dead at the scene at 4:54 p.m. and died of a gunshot to his neck, the medical examiner’s office reported.

He was the subject of four active warrants. One was for suspicion of attempting to strike a Benbrook officer with a vehicle, Enright said. Did it occur to anyone that Goldston might not have seen the plainclothes officer, or even realized she was a police officer? I’m not attempting to justify his actions, just understand them because, if that was the case, then he probably wasn’t trying to injure the officer just trying to avoid jail. It would also change the the justification for shooting him, because if no one was endangered then the officer shouldn’t have fired their weapon.

Put yourself in Goldston’s position for a moment. You just come out of a house and all of a sudden a uniformed police officer is walking towards you. You try to reverse the truck quickly to back up, you don’t see the person behind you (who dove out of the way – allegedly – and is on the ground), and then bullets start flying. Seems likely that this happened so fast Goldston probably didn’t have a chance to notice the second officer or fully understand their intentions.

Let’s assume Goldston was involved with drugs, or had knowledge of his warrant, can you blame him for wanting to drive away and not go to jail? If the second officer wouldn’t have been there, would the officer that fired just let Goldston drive off? Probably not, but he also probably wouldn’t have shot him. The officer most likely would have started a pursuit. Yet, add in the fact that he’s wanted for a similar offense and you have the perfect cover. The article linked above mentions that Goldston was wanted on suspicion of attempting to strike a Benbrook officer with a vehicle. So this storyline is fitting to someone with knowledge of this background, which these officers clearly had. I’d be willing to bet that both these officers approached the truck and at some point stated, “Police” or “Freeze.” That’s when Goldston decided to attempt to flee and the uniformed officer merely opened fire.

Maybe the uniformed officer THOUGHT the second officer was in more danger than they actually were, or maybe he did fire his weapon too soon. Either way, on the surface this looks like an easily justifiable shooting, but to me it seems like too many pieces fit together a little too nicely here. Yet, if you don’t side with my theory that the police probably overreacted to a natural instinct to flee capture by exaggerating the amount of danger they (or one of them) were in, then remember that this started because police were watching a house for drugs.

Yes, some drugs are bad, but the drug war is worse. The cost, violence (on both sides), and loss of life is not worth it. If people aren’t free to put whatever they want in their own bodies, how free are they? Would police be watching someone’s house, would Goldston have been at that house or would he even had warrants, if it were not for the war on drugs? Probably not and so, he’d still be alive if there wasn’t a war on drugs. We have to start asking ourselves how many more people have to die before the war on drugs can be ended for good?