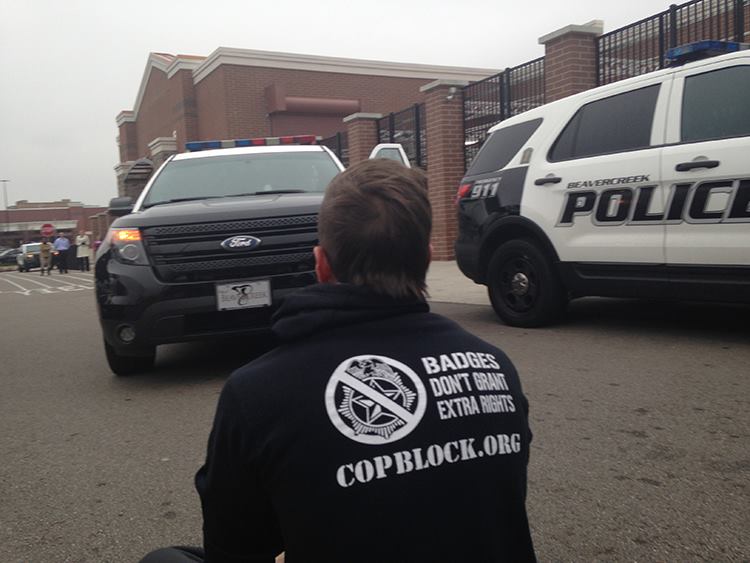 Benjamin Virnston is from the Beavercreek, OH area and an active Ohio CopBlocker – he recently joined myself and others at the Columbus CopBlocking of an OVI Checkpoint, who was arrested in December 2014 for sitting in front of a police car. Seems like a silly thing to do unless you understand why Benjamin had decided to do such and it starts with the murder of John Crawford by the Beavercreek Police department.

Since the murder of John Crawford, folks have gathered at the Walmart where he was killed every month for nearly a year. Back in December, folks had decided to do a die in at the pet aisle where John was murdered. The store was shut down, Walmart employees allowed the protest to happen and everything seemed just find. That was until the protestors went to leave the property. That’s when police started to surround them with their cruisers and SUV’s to force the group off the property.

Benjamin and others attempted to peacefully sit in front of the advancing police cruisers and were arrested for criminal trespass and obstructing an official. Today Benjamin pleaded guilty and according to Counter Current News – an allied outlet of CopBlock.org:

Benjamin Virnston, 25, was booked into the Greene County Jail to begin serving his 90-day jail sentence for sitting down and preventing the illegal use of a vehicle for crowd control.

Sandra King, 56, the woman who was backed into, was fined $150 and ordered to serve 16 hours of community service, along with a sentence of 30 days in jail, with all but one day suspended.

There are still jury trials scheduled for the African American man who was singled out: Elias Anthony Kelley, 27; and Matthew Raska, 24, who joined Ben in blocking the police SUV cruisers.

What can you do?

Benjamin Virnston is in jail RIGHT NOW because he had the courage to SIT DOWN in front of a police SUV cruiser that was threatening to run into protesters – and which DID run into a protester after they had arrested him and Matt Raska!

CALL the Greene County Jail NOW at (937) 562-4840 and speak with someone or leave them a message, standing up for Ben and the OBLIGATION of citizens to stand up to illegal police acts of violence against non-violent protesters. Tell them to FREE BENJAMIN NOW! Then help us SPREAD THE WORD!

That’s right Benjamin is in a cage for 90 days for sitting in front of a car, while the man that killed John Crawford drives one of those same cars around town every day. Is this justice? Is this peace? Please consider giving a call to the jail to let them know you’re supporting Ben. I’ve met him personally and he’s a stand up dude. I’m sorry to hear he’ll be spending the next 90 days in a cage.