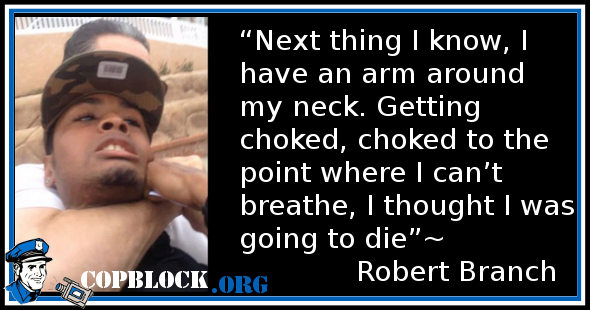 You’re headed off to work and all of a sudden a person walks up to you and says you’re being detained. They flash a badge and tell you to come with them, but you still have no idea what you did. So you pull out your phone and start recording, but the next thing you know you’re in a choke hold and can’t breathe. That’s what happened to Robert Branch according to San Diego 6 News:

The 25-year-old said he was heading to work as a security guard May 4, wearing a security vest, when he was confronted by Detective Paul Ward.
Detective Ward was attempting to issue Branch a traffic citation from an earlier incident on Interstate 8, said department spokesperson Jan Caldwell. Ward was on-duty at the time in an unmarked department vehicle that did not have lights or a siren, she confirmed.
When Ward asked Branch for his license and registration, Branch refused, arguing that the deputy appeared to be off-duty. The two exchanged words before Branch pulled out his cell phone and began recording the incident.
“Next thing I know, I have an arm around my neck. Getting choked, choked to the point where I can’t breathe,” he said.
In the struggle, Branch dropped his phone, but you can hear the tussle continue for several minutes.
Detective Ward used a department-approved “carotid restraint” on Branch, not a chokehold, Caldwell insisted. She explained the difference is that a carotid restraint is designed to momentarily decrease blood flow so a suspect briefly loses consciousness. A chokehold, which is not approved by the department, restricts air flow.

Can you believe this!?! First the officer wasn’t clear on why he was stopping Branch and/or why he was following him for nine miles to begin with. Now to have the department try to play a mix on words to lighten what Branch had experienced is absolutely ridiculous. I guess CopLogic now includes restricting blood flow to be a better means of killing someone as to restricting their air flow. Except, it really isn’t that much different:

During the incident, Robert Branch can be heard screaming “I can’t breathe” and “Tell my mother I love her.”