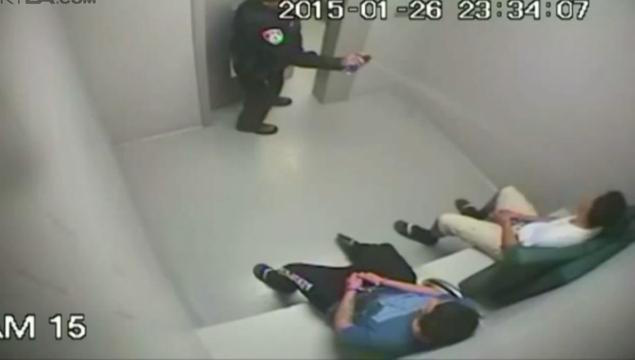 Video has recently been released which shows an Alton, Illinois police officer as he pepper sprays two teens who are handcuffed and in custody at the Alton Police Headquarters. According to KTLA5:

An officer walks in, says something, and then raises what appears to be a can of pepper spray and sprays both teens.

One of the teens then twitches and shakes for several minutes.

The officer was identified as Vince Warlick by the local newspaper, the Alton Telegraph.

Alton is less than 15 miles from Ferguson, Missouri, where Michael Brown was fatally shot by police Officer Darren Wilson in August 2014, prompting waves of protest and riots. Since that time, the use of violence by police has been in the spotlight and has been targeted by those calling for reform.

The video was turned over to Illinois State Police by the State’s Attorney’s Office.

Illinois State Police will recommend any criminal charges to the county state’s attorney, if appropriate.

What exactly needs to be investigated here? What is the scenario in which it is okay to use non-lethal weapons against handcuffed teens already in custody and of no threat to the officer? There is no scenario where that is okay. Justice often enters a lot of murky areas and it is in that gray space that the police state has thrived. But there is no gray area here. There is no justification that can be revealed through more information. This is not an episode of Three’s Company where the the camera just happens to walk into the room at the wrong time and see’s something that looks bad, even though its quite innocent. There is no ‘This is not what it looks like.’ It is exactly what it looks like. It is a public servant abusing his power to needlessly inflict pain and suffering on other human beings. It is sanctioned sadism.