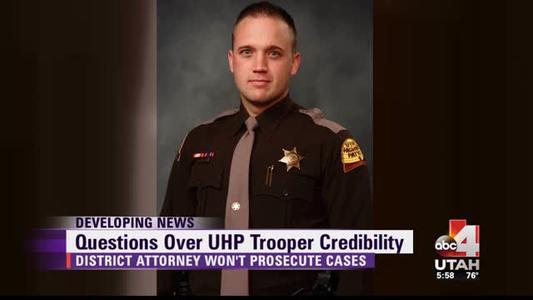 If you haven’t been on the receiving end of a suspected DUI stop yourself, you probably know someone who has. Now, imagine that you’re stopped for suspicion of drunk driving – or for something else – but you aren’t legally drunk and the lazy cop simply decides to book you for DUI without a field sobriety test. That’s what happened in alteast two cases recently exposed by ABC 4 from Utah. According to their report:

Good 4 Utah obtained the dash cam video that led to Green’s resignation from a defense attorney that represented the man arrested by Green.

In August, 2013 Green had his dash cam recording as he pulled over Gavin Gabor in Layton.

The trooper quickly learned there was a warrant for his arrest on a drug case in Sunset.

Gabor appeared to be explaining to Green that he had resolved it. But Green claimed he had to take him in. But then Green asked him another question. He asked whether Gabor had smoked any marijuana in the past month. Gabor said he did.

That’s when Green arrested him on a new charge of being DUI metabolite (drugs).

But the video didn’t show that and his case was dismissed.

“When we have people the push the boundaries and try and get a conviction just to increase their record or get their quota,” said Gabor’s attorney Matthew Nebeker. “That’s bending the rules and things breakdown.”

Attorney Jason Schatz also defended a woman who was pulled over by Green. But the case was overturned on appeal.

The woman was facing a DUI charges and lost her license after the state Driver’s License Division sided with Green.

But during the appeal, Schatz obtained the dash cam recording of Trooper Green’s arrest.

Green was asked by the state attorney about the arrest. The following is part of the court record.

Prosecutor: “Did you get out of your vehicle prior to transporting her?”
Green: “No, no after Baker I remained with her.”

“He knew it was inappropriate for him to get out of the car when he was asked the question by the attorney general,” said Schatz. “He denied getting out of the car and the video tape clearly showed that he did.”

A judge came to the same conclusion.

Schatz says by law, after making a DUI arrest, an officer must keep his eyes on the defendant after checking their mouth for any substance 15 minutes prior to taking a sobriety test. It’s called the Baker rule.

When Schatz played the dash cam recording it showed Green actually getting out of the car contrary to what he testified. The following is part of the court transcript when Schatz cross examined Green about that very point.

Trooper Green: “I started to recall that. I believe it was the passenger of the vehicle (that he went outside of his vehicle to help) Anyway I believe it was her that I fastened her seat belt.”

Later when questioned about offering a new Baker as required by law Green answered:

“I believe I may have observed Baker a second time.”

But the dash cam video didn’t record any audio of Green saying he wanted to conduct another mouth test which he must do after breaking eye contact with the defendant. The case was overturned by the judge.

“You have people who may be convicted of losing their license, going to jail based on false evidence and that’s a problem,” said Schatz.

The ABC affiliate and attorney’s did a good job digging up these facts that allowed them to expose Green. Thankfully he’s no longer working for this department and hopefully no other in the future. Yet, one thing missing is why? Why did Green fabricate evidence, why did he claim to give Field Sobriety Test when he hadn’t and why was he willing to cage people without due process?

The answer to this could be quotas or simple laziness. We probably won’t ever know which but it’s something that should be asked because I doubt Green is the only one taking short cuts during their investigations, especially ones that require as much paperwork as a DUI arrest. This is why people should never take plea deals, you might just catch a cop slipping up, trying to achieve his quota, and be able to walk free – especially on victimless crimes.