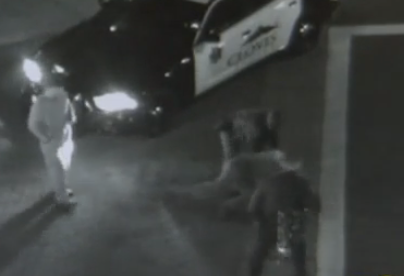 Police in Clovis, California are facing a lawsuit stemming from accusations of excessive force during a public drunkenness arrest. Video of the incident appears to corroborate the accusations made by arrestees Travis and Justin Smith and their lawyer, Jeff Hammerschmidt. According to KFSN TV Fresno:

[Police delivered] A shot to the head and a knee to the kidney on one brother, while the other brother took a blow to the head as well.

The brothers have filed a government claim against the city of Clovis for the violent arrests. They drew the attention of police with some foul language and apparent drunkenness. By the time they got out of custody on charges of resisting arrest and being drunk in public, they had bloody faces and say they were concussed as well.

Travis Smith wandered out of an old town bar and straight into trouble. A Clovis city camera shows him talking to an officer, then trying to walk away, and scuffling when the officer tries to stop him. Another police car pulls up, and Clovis police officers take him down. His attorney has no problem with what happened up to here. But this is where it gets tricky. The same officer who took him down delivers an elbow to the jaw followed by a knee to the kidney area. Hammerschmidt says those are both potentially deadly use of force against a man who, at that point, was not resisting arrest. And when Justin Smith came out of the bar a few minutes later, he says the eventual interaction is even more troubling.

“The one officer, plainclothes, actually looks around to make sure no one’s watching and then drops a knee into Mr. Smith,” Hammerschmidt said.

But the attorney hasn’t even figured out who that officer is. He says the video is shocking, but the police reports are almost as bad. You can see seven people involved in arresting Justin Smith, but only five are mentioned in the reports. And officers only documented only one of the blows that could be considered potentially deadly — calling it a “distraction blow.”

“If you read the reports in this case and then watch the videos, you’d think you were watching the videos from the wrong case,” Hammerschmidt said. “They don’t match the reports at all.”

Hammerschmidt wants prosecutors to drop the charges against his clients. And they’ve already taken the first step to sue the city based on injuries they say they suffered, including concussions.

Action News reached out to the police chief in Clovis, Matt Basgall, who told use this was the first he heard of this incident, but he “will look into the matter and review any tape that may exist as well as look into the allegation of excessive use of force.”

Is it just me, or are the nations police departments all being led by police chiefs who have no idea what is happening in their department? Nearly every case of abuse I read these days contains a statement of ignorance by the person in charge and ultimately responsible for preventing and punishing these abuses. How can we have police accountability when the person police are accountable to has no idea what is going on? And if police chiefs aren’t keeping up to date and in control of their departments, what are they doing? How much are we paying these people on top of what we have to pay out in lawsuits because they aren’t doing their jobs? If this is the system working, then aren’t we better off without it?