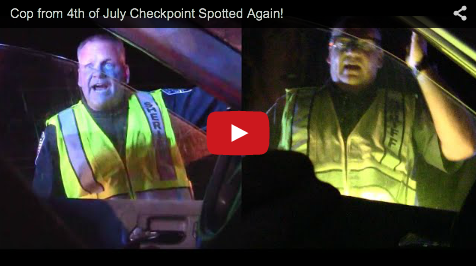 (Murfreesboro, TN) Remember the cop from that extremely revealing Independence Day checkpoint video? Well he happened to get caught on camera again! On his best behavior this time, of course. That may be due to the fact that the last video he was in got shared all over the world, or that this time, the driver had a passenger with him and several more cameras.

The first time the driver was stopped by this deputy at a routine sobriety checkpoint, Deputy A.J. Ross wasn’t aware that there was a camera rolling in the passenger seat.

In the original video of the incident, the driver rolled up to a sobriety checkpoint with his window rolled down a few inches, enough space to have a conversation with the deputy. The deputy walks up to the driver’s car and asks him to roll it down further, to which the driver tells the deputy that he can hear him just fine. After being told this, Deputy A.J. Ross orders the driver to pull over to secondary. The driver, who committed no crimes whatsoever, asks the question, “Am I being detained?” but instead of answering the question, Deputy Ross yells at the driver to pull over.

Within seconds, a gang of officers surround the vehicle and use intimidation to order the driver to come out. He eventually complies, but that doesn’t end the harassment. When he gets out of the car, deputy Ross, forces him to give him his ID, even though this was supposed to be a sobriety checkpoint and the driver had not broken any laws.

The driver then undergoes a weapons search after being ordered out of the car. The cop searching the driver can be heard saying, “Right now, what I’m doing is called an inspection for weapons, for my safety.” As if his safety was all that was important. Never mind the fact that they were the ones that pulled the driver out in the first place and they were the ones doing all the harassing.

The driver and the deputy then get into a conversation about the constitutionality of the stop, to which hilarity ensues. In an exact quote from the video, deputy A.J. Ross shows his knowledge of the oath he swore to uphold when taking his job:

Ah, yes, the old “if you have nothing to hide” propaganda tactic.

The driver then says to the belligerent deputy, “Having rights is not disrespectful.” Being angered by this, the deputy then decides to search the vehicle without the driver’s consent, to which the driver told him, “I don’t consent to searches.” The deputy then says, mockingly,

“What do you know about dogs? What does the Constitution say about dogs?”

A K9 handler then walks around the car for several minutes, letting it crawl all over the hood and scratch it.

In the video from the camera still recording in the vehicle, it shows the K9 handler using his hand and voice to get the dog to fake hit on the car, giving themselves permission to search it without the consent of the driver. During the search of the car, one of the cops is seen on video, saying, “It wasn’t a very good alert” before noticing the camera in the passenger seat that was recording their actions the entire time. “A.J. . . . it’s running.” the K9 handler says to the deputy. Deputy A.J. Ross immediately grabs the camera, turns it the opposite direction and then turns it off. The driver was then let go with no charges.

Unconstitutional stops like this happen all the time and it seems to have become the norm. At some point, we must ask, what’s the point of police even swearing the oath if they constantly violate it in their day to day duties? If the driver had not recorded the stop, this would have been just another incident like many that are swept under the rug.