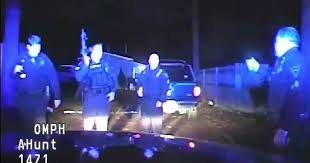 Recently, a video was released showing Fayetteville Police officer, Aaron Hunt, shooting 22 year old Nijza Lamar Hagans in the back as he attempted to run from a traffic stop in 2013.

In the video you can see Hunt next to the driver’s side of the vehicle, when Hagans tries to flee. It appears that Hunt fired off a round or two before getting his balance and putting two shots into Hagans back. Hunt claims that as he asked for Hagans’s identification he could see the butt of a firearm in his pocket. This prompted Hagans to take off, he was able to knock Hunt off his balance when exiting the car and had a good 5 foot jump on the officer. Who, at that time, decided it would be best to shoot Hagans in the back, as opposed to any other means of capture.

A .380 caliber pistol was recovered from Hagans’s body on the scene, but it doesn’t appear he had any intention of using it against the officer. As seen in the video, he had nothing in his hands when he left the car and, as far as we can tell from the video, had his back turned to the officer at the time of the shooting. This is backed by the medical review of Hagans’ body. Of course, Hunt claims that Hagans was reaching for it as he fled the car and attempted to get away. Yet, the gun was still in his pocket when backup arrived.

Now I’m going to make an assumption, that Hagans knew he’d go to jail for the gun. So he tried to flee, but does that warrant being shot in the back? Does possessing a firearm warrant a death sentence? Should officers be retrained to hold their fire when a person has their back to them? How many more people will have to be shot trying to run AWAY from an officer, before the masses finally ask for change?