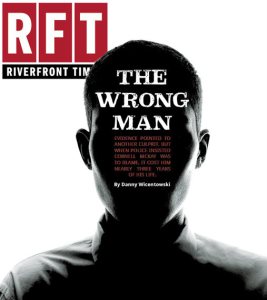 The following was shared via CopBlock.org’s submit page. This article, a lengthy feature piece from Riverfront Times in St. Louis, describes how St. Louis detectives, prosecutors and a judge blocked Cornell McKay from proving his innocence as he rotted in jail for nearly three years on armed robbery charges.

After a team of high-powered attorneys got involved, McKay appealed and won a retrial. According to his lawyers, prosecutors framed McKay in order to cover up how detectives investigating an August 10, 2012 robbery mistakenly fingered their client, an innocent man, instead of the true culprit — a man named Keith Esters.

The detectives and prosecutors, they say, had good reason for such a cover up: Eight days after the robbery, on August 18, 2012, Esters shot and killed 23-year-old Megan Boken.

“It’s a hell of a reason why these guys were so determined to put the case on Cornell McKay,” Ramsey told me. “Because if they had arrested the right guy, Megan Boken would be alive right now. That is very powerful.”

The state fought the appeals court decision all the way to the Missouri Supreme Court, but the justices declined to hear the case. Shortly afterward, St. Louis’ top prosecutor, Circuit Attorney Jennifer Joyce, announced there would be no second trial — her office was dropping the charges. On Wednesday last week, I got to witness Cornell come home.

Cornell McKay has just been found guilty by a jury of his peers, so even though he has not yet been sentenced, the guards at the St. Louis City Justice Center are taking every precaution. The wiry 22-year-old is wearing an orange jumpsuit; his hands are cuffed behind his back.

“It’s a lot of humiliation, to live in this place,” McKay says. He squirms in his chair, trying to find a more comfortable position in the too-tight handcuffs. “You gotta get strip searched, you gotta be around these rapists and these murderers.”

McKay’s trial, a hotly contested four-day affair, centered on an armed mugging in the Central West End, a relatively simple robbery that initially didn’t even make the local news. It quickly became much more than that, though, embroiling a high-profile murder case, another possible culprit and a series of questionable decisions by a St. Louis judge and prosecutors.

McKay’s lawyers, who would fight for years to free him from prison, say police identified the wrong man — and then refused to look at a mountain of evidence that would clear their client.

They dug their heels in, McKay’s lawyers say, to cover up their own ineptitude. If police had pursued the case aggressively from the beginning, they argue, they could have arrested the right man, the real robber. And if they’d done that, they could have saved the life of a young woman murdered in the Central West End.

“It’s a hell of a reason why these guys were so determined to put the case on Cornell McKay,” McKay’s attorney Bob Ramsey tells Riverfront Times. “Because if they had arrested the right guy, Megan Boken would be alive right now. That is very powerful.”

On this day in February 2014, fresh off the loss in court, McKay is feeling forlorn.
“It’s a lot of humiliation,” he says again, “losing out in a trial for something you didn’t do.”
Continue reading…