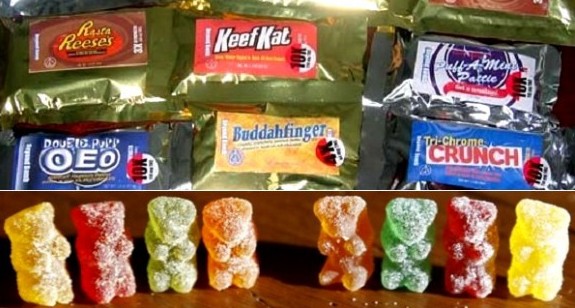 The recent legalization of marijuana in places like Colorado and Washington-State has meant the growing popularity of THC-infused edibles around the country.

Ranging from cookies to lollipops and brownies to gummy bears, and even popcorn, police in states where prohibition still exists are gearing up to take on this new illicit and dangerous threat – for the children, you see.

Identification of the wares, which are mostly arriving in other states by way of the large scale and legal production processes in Colorado and California, is a drug warriors wet-dream. – Got some candy citizen? Thats probably cause!

Already around the country, police are searching and seizing food.

The Illinois state police charged a man in Kane County, Ill., with cannabis trafficking last year after discovering that 42 pounds of marijuana-infused chocolate had been sent to his home from a medical dispensary in California.

In February, police in San Antonio seized about $100 worth of edibles, including brownies, gummies and chocolate. During the same month in Franklin Township, Ohio, a county drug task force raided five locations, including an “illegal bakery,” and seized more than $1 million worth of marijuana plants, hashish oil and butter, and edibles ranging from brownies to fudge and other candies.

Also in February, Missouri troopers confiscated 400 pounds of commercially made marijuana chocolate, including Liquid Gold bars, hidden in boxes in an Infiniti QX60. The driver was arrested on suspicion of possession with intent to distribute a controlled substance.

In New Jersey, which has medical dispensaries, though edibles are still prohibited, the state police last month seized 80 pounds of homemade marijuana treats from the car of a Brooklyn man.

Last year, the Oklahoma Bureau of Narcotics and Dangerous Drugs confiscated roughly 40 pounds of commercial marijuana products in one seizure, including taffylike Cheeba Chews and bottles of cannabis lemonade.

Recently, in LaFollette, Tennessee, officers pulled over a Chevy Blazer and found 24 pounds of marijuana-laced cookies, marshmallows, and small hard candies shaped like gingerbread men, plus a tub of marijuana butter for making more.

“This is the first time that we have ever seen marijuana butter or any of this candy containing marijuana in the county,” LaFollette Police Chief Jim Jeffries said. “We hope it’s the last time.”

Opposition groups of legalization are blaming the confections for accidental use of marijuana by children who are unaware of what it contains. During 2013 and 2014, however, only a total of 14 children were hospitalized for ingesting them and all of them survived. “Marijuana. It is one of the most dangerous drugs on Earth,” an article appearing on the official D.A.R.E. website earlier this month read. “For every one joint of marijuana, four teenagers become burdened with pregnancy.”

“Children are being addicted to marijuana,” the author writes. “I knew this day would come, when a liberal president allowed a state to legally sell Marijuana Flintstone Vitamins to children.”

The article titled “Edible Marijuana Candies Kill 9 in Colorado, 12 at Coachella” turned out to be a repost from the satire website, topekasnews.com. In other words the story is fake, as are the numbers it cites. D.A.R.E has since removed the article but has offered no comment about being duped by the obviously ridiculous story.

This new national landscape surrounding edibles, privacy advocates fear, is giving police another arbitrary excuse for harassing, intimidating, and searching residents in the states where marijuana is still illegal.

The ACLU points out that drug arrests now account for a quarter of the people locked up in America, but drug use rates have remained steady.

Over the last 40 years, the organization states, taxpayers have spent trillions of dollars on the failed and ineffective War on Drugs. Drug use has not declined, while millions of people – disproportionately poor people and people of color – have been caged and then branded with criminal records that pose barriers to employment, housing, and stability.

Taxpayers spend almost $70 billion a year on corrections and incarceration. A far more sensible way to deal with a public health problem like drug addiction is to provide treatment, which study after study has shown is more effective than incarceration.