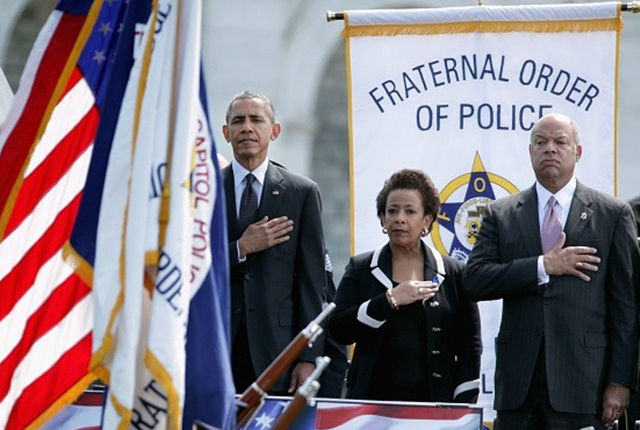 President Obama announced on Friday that he will issue an Executive Order to legally change the title “police officer” to “Police Hero.” Obama did not mince words as he addressed those at a Washington D.C. memorial held for police killed in the line of duty.

Once signed, the Executive Order will take effect nationwide. Obama pledged $25 million to be distributed via grants to police departments to offset the costs of new desk placards, name badges, and business cards.

In a speech that was met with applause from those present, Obama stated:

“We can offer you the support you need to be safe… We can make sure that you have the resources you need to do your job.”

Obama pledged to triple the amount of military hardware available to police departments through the Defense Logistics Agency 1033 Program.

“Terrorism and anti-police factions have created a climate of fear. America’s Police Heroes need to be properly equipped. We will bring the fight to them.”

Under conditions of anonymity, a presidential aide disclosed that the Executive Order will also include a provision to criminalize any degrading reference made to Police Heroes. In theory, this will prevent Police Heroes from being disrespected, thus improving safety for law-abiding citizens.

Upon learning of the pending Executive Order, Al Payne, Jr., head of the Fraternal Order of Police, shared the following via his Twitter account:

“It’s about time that America’s Police Heroes were recognized. After all, we’re all that stands between civilization & the terrors of anarchy.”

If it didn’t already dawn on you, yes, this article is satirical.