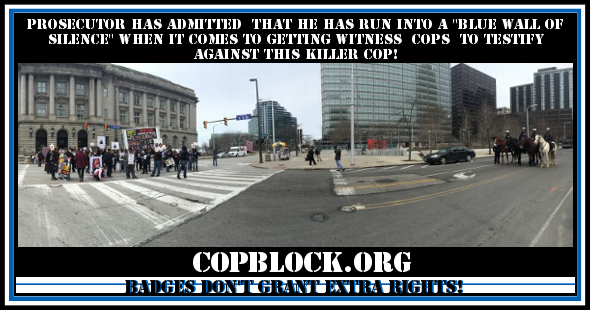 I have been perusing the lamestream media for the last few days regarding this Brelo Verdict. In true cowardly form, the justice system is dragging it’s feet not only in the Brelo case, but in the Tamir Rice case, as well. It has been six months since Tamir was shot and they still have not questioned Loehmann, the cop that shot him, or Garmback, the cop that drove the car. In the Brelo case, the judge has made a statement that, “It could be days even weeks until the verdict…” This same judge made the statement earlier this month according to Scene magazine, that ” After May 15th , it would be read. Cleveland Scene reports:

If you scan even the most surface-level social media commenting or television newscasts these days, you’re sure to run into all sorts of paranoia about rampant destruction that lies ahead. The city has been in APB mode, alerting residents across all wards that violence will not be tolerated — even as Cleveland’s protesters have undertaken nothing more aggressive than acts of civil disobedience since Nov. 22.

The concern, broadcasted from City Hall and from your brother-in-law’s Facebook page, is that people from out of town will scorch this mufukin city.

…And the Lamestream media keeps talking about violence erupting in Cleveland over this Brelo verdict. The people of Cleveland are classy people. We don’t riot. But how could you expect us not to, if justice is not served in this case and the many others that are pending? BTW, don’t let one case fool you into thinking this is an isolated incident. Cleveland police have killed at least three people under mysterious circumstances in the recent past, and have no less than three of these cases in some phase of the justice system awaiting an outcome! But I digress.

It appears to me, the lamestream media wants violence to erupt in Cleveland, which is why they keep suggesting it. Why? Cause that makes for a good story. However, many socially conscience citizens all stepping up to oppose police brutality peacefully doesn’t make for good headlines! Lets not give them that satisfaction Cleveland! I mean, far be it from me to tell anyone what to do, but this house of cards, this organized crime family that is the Cleveland police department, is crumbling!

The prosecutor has admitted to Truth Voice news that he has run into a “Blue Wall of Silence” When it comes to getting the other cops, pardon me witnesses, to testify against this killer cop! Maybe its because they all feel responsible, having ALL fired shots into Timothy and Malissa’s car that night,  and can’t just let Brelo go down alone! I don’t know, but what I do know is that this nonsense has got to stop! If the people of Cleveland are to be at peace, then this jury must convict this killer cop. Future verdicts will also have to produce police accountability, not just escape clauses and “get out of jail free” cards for these killer cops!

The only way it is going to stop is if concerned people like us continue to film every single police encounter we have! Show the police state for what it is! Take an active role in your own security when dealing with these organized crime soldiers! When the police are worse than the criminals they are supposed to be protecting people from, it’s time for a change! Be the change Cleveland! Know your rights, Always film police, and remember that “Badges Don’t Grant Extra Rights!” Remain peaceful it is what sets us apart in my opinion!